“Some Men Just Want to Watch The World Burn”

Federal forest policies over the past several decades have drastically restricted the harvesting of timber.  In many forests, less the 10% of even the new growth is being harvested from already substantially overgrown forests.  This only further increasing the risk and magnitude of catastrophic wildfires.  As trees struggle for water and nutrients among a greater density of trees, they are weak and unable to fend off disease and pests – imagine a pen that normally holds 50 cows being crammed with 900-1,000 cows all struggling for the same amount of food and water in that confined space.  Our forests are sick and dying all over the west due to failed federal forest policies.  This is not the case on state, tribal and privately managed forests where they actively tend the forests “garden” and remove weeds and provide adequate spacing for the the trees.

Finally recognizing the need to actively address these catastrophic conditions, the United State Forest Service is beginning to propose large prescribed burns to eradicate the beetle devastation.  Recently, Piute County (Utah) Commissioner Darin Bushman and Piute County Sheriff Marty Gleave met with USFS officials regarding the 27,000 – 32,000 acre prescribed burn they plan for the forests in and around Piute County.   Commissioner Bushman and Sheriff Gleave asked whether the USFS would be allowing an opportunity for citizens and business to remove as much of the standing dead trees as they could before the prescribed burn.  They were informed by USFS officials that such activity would constitute a “commercial harvest” and would require lengthy Environmental Impact Statements subject to lawsuits and many other delays.  Therefore, the USFS is refusing to allow any harvesting of the standing dead trees before they burn the whole area down. 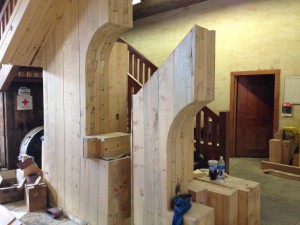 Interestingly, I happened to be passing through Midway, Utah last week and stopped in to Euclid Timbers.  The owner, Kip Apostol, showed me how they take standing dead timber, mostly from state and private forests, and create homes that reduce energy consumption by as much a 75%.  They do this through a special process that creates structural walls up to 2ft. thick.  This density of the walls actually serves as a fire deterrent – just like throwing a thick phone book on a fire, it will char but it won’t burn.  Kip said there is enough standing dead timber in and throughout the national forests to build 50 million of these energy-efficient homes.  There are lots of other uses for these standing dead trees including renewable energy where the emissions have been nearly eliminated. This is what American ingenuity does where liberty, property and self governance are protected and secured by government rather than being ruled and regulated into oblivion.

However, centralized, bureaucratic (“One Size Fails All) control like the USFS would rather burn up the entire forest, and the substantial economic opportunity, and with it a tremendous loss of animal life, habitat and watershed, plus the release of millions of pounds of pollution that could have been effectively stored in energy-efficient homes, products and the production of renewable energy. 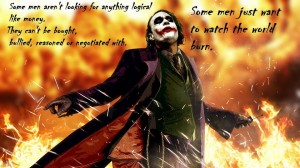 I couldn’t help recalling the similarity to the scene in Batman: The Dark Knight where he is struggling to understand what would possess a madman to just destroy the world around him.  His butler explains “Some men aren’t looking for anything logical like money. They can’t be bought, bullied, reasoned or negotiated with.  Some men just want to watch the world burn!“