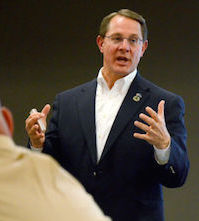 This week a slanderous attack was levied against American Lands Council (ALC) President Ken Ivory by a mysterious new group seeking to derail our mission of transferring federal public lands to willing states. In an orchestrated publicity stunt, the group filed consumer complaints alleging that ALC's efforts to discuss with and educate the public about state control of public land is somehow,"fraudulent." Ironically they allege this while simultaneously issuing a press release touting unfounded and inaccurate claims about Ken Ivory, ALC and our supporters.

"There are those who would like to silence our organization and deny the public the opportunity to discuss critical issues regarding ownership and management of public lands." said Kane County, UT Commissioner Doug Heaton who is a founding member of the American Lands Council. "The economic, legal, and environmental case for transferring public lands to the states is so strong that hundreds of elected officials have joined our efforts to improve access, health, and productivity on public lands through local control, and nearly every state in the west has introduced transfer of public lands related legislation. Some states have called for the transfer and others are studying it. Even eastern states are coming on board."

Recently, key members of Congress formed a "Federal Land Action Group" to map out a path for transferring federal land to willing states, noting, "The federal government has been a lousy landlord for western states and we simply think the states can do better."

The American Lands Council was established in 2012 by County Commissioners and State Legislators who share the goal of achieving more thoughtful, accountable, and locally driven stewardship to improve public access, environmental health, and economic productivity on public lands.

As for the personal attacks on Ivory, Heaton surmised, "That is the low road the opposition seems to prefer, but it's nothing more than another deceptive publicity stunt. Ken Ivory is a man of impeccable integrity, an unfailing advocate of liberty, and a brilliant legal mind. We are blessed to have him leading this effort because better management of our public lands truly will benefit our counties, states, and our nation as whole."

Ivory brushed it off as "desperate bullying."

"These types of organizations have just destroyed Western public lands  through this kind of  litigation and bullying tactics," he said. "They're so afraid of the success that the transfer of public lands movement is having that they're stooping to these kinds of bullying  tactics because they can't tolerate basic political debate."

Ivory successfully sponsored Utah's Transfer of Public Lands Act which passed into law in 2012. The policy has garnered endorsements from the National Association of Counties and a variety of state and local governments, as well as other organizations who have studied the issue.

To obtain a copy of this press release email Shelby@AmericanLandsCouncil.org.