This article originally appeared on Dailysignal.com on 12/27/15

A forest fire on national parkland in Washington state in 2014 overtook a young black bear, seriously burning its paws. This little bear, which would gain world renown, crawled on its elbows out of the massive Carlton Complex fire on land managed by the U.S. Forest Service.

With forests overgrown and piling up with underbrush and dead and dying trees, some would argue that releasing Cinder into a federal  preserve carried an unfortunate degree of risk for the tough little bear.  Federal “no-logging” policies, it seems, are turning America’s national forests into catastrophic kindling.

How Much Land Near You Does the Federal Government Control? This Map Tells You

This map from the Bureau of Land Management illustrates the great imbalance between West and East when it comes to how much land is under federal control: 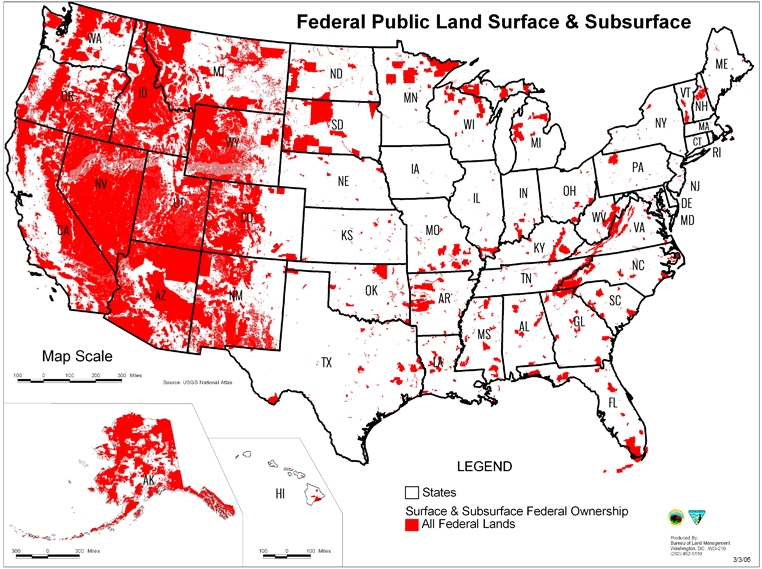 Unlike states east of the Continental Divide, most public lands in Western states are still controlled by the federal government. They are under the management of the Interior Department and a plethora of subagencies, including two of the most conflict-riddled land management agencies in the nation --the Bureau of Land Management (BLM) and the United States Forest Service (USFS).

Under the umbrella name “Transfer of Public Lands,” the movement offers a solution to the problem that is simple in concept:  transfer ownership and management of public lands administered by certain federal agencies to more nimble and accountable state agencies. These agencies, who answer to governors, state legislators and citizens in each state where the land is located, will be directed to manage the public lands in a more conscientious way.

Utah is at the forefront of the Transfer of Public Lands movement. In 2012, the state passed legislation that lays down the foundation for transferring public lands to state ownership.

National Parks, national monuments, tribal lands and Defense Department property are excluded from the requested transfer. It is only the poorly managed BLM and USFS land that transfer proponents seek to turn over to more accountable state governments.

Organized by state and county elected officials in 2012, The American Lands Council has been tireless in making the legal and moral case for transferring public lands in the West to the states.

“Public lands stay public,” says Rep. Ken Ivory, the Utah legislator who successfully introduced the Transfer of Public Lands Act, "and our national treasures will be well protected and preserved.”

In October 2015, The Los Angeles Times published an article noting that seven Republican candidates for president had expressed support for devolving federal jurisdiction to the Western states.

Can states afford it? According to an analysis by the Property and Environment Research Center, federal public land management consistently results in a net loss of revenue but state management produces a net gain. State governments are simply more efficient at public land management than behemoth federal bureaucracies taking orders from politicians and bureaucrats headquartered thousands of miles away. Responsible utilization of natural resources could easily produce enough revenue to cover management costs. 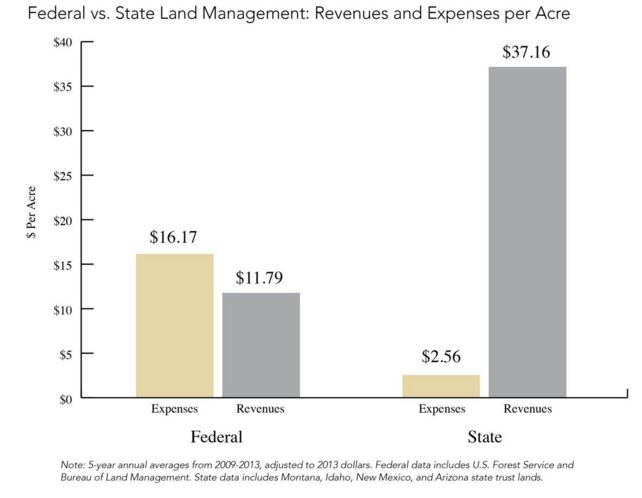 Bungling, overreach and overreactions by the federal government are making the case for a shift to state control

The true stories of human suffering and environmental degradation associated with the broken federal system are jaw dropping.

For example, in November 2008, Rose Backhaus, a 54-year-old Colorado woman, lost her life while hiking in Utah’s federally managed Little Wild Horse Canyon. She became lost in the canyon after taking a wrong turn on the trail.

The BLM, which is responsible for the property, had received requests from locals for years to place a sign in the canyon directing hikers to the proper trail. The federal agency argued that such a sign would be too expensive and have an adverse impact on the “wilderness experience.” She likely wandered for days, eventually succumbing to exposure. Her body was found by hikers the following April.

More recently, a woman in Josephine County, Ore., feared for her life as a man broke into her home. She called 911 and was told there was no one available to help her because of budget cuts. The local sheriff’s office, lacking the resources to pay deputies and staff, failed to respond to the woman’s pleas. The intruder later plead guilty to brutal sexual assault.

How does this rape in Josephine County relate to federal land policies? Josephine County had thrived for decades on an economy that revolved around logging and replanting the forests. When the federal government halted logging activity in that area, the timber industry imploded, timber tax receipts dried up, and jobs vanished. Poverty, drugs, and crime surged. Broke and beleaguered, the county government, including sheriff’s office, experienced drastic budget cuts.

The consequences of misguided federal policies are impacting counties throughout the west in similar ways.

A respected family man, civic leader and local physician named Jim Redd was under scrutiny by BLM and FBI agents on suspicion that he looted nearby American Indian archaeological sites and traded artifacts on the black market.

The Times reported that a paid, undercover informant working for the BLM and FBI,  equipped with a “button” surveillance camera, spent hundreds of hours in Dr. Redd’s home, perusing artifacts his family had collected for generations.

The informant, identified as Ted Gardiner, was seeking evidence that would link Redd to the illegal antiquities trade. Eventually Dr. Redd’s wife, Jeannie, gave in to Gardiner’s insistence by selling him a pair of yucca sandals. With that transaction supplying the "evidence" they wanted, a massive, military-style raid ensued on the Redd home.

In another case, father-and-son Oregon ranchers Dwight and Steven Hammond were convicted of arson and sentenced in October to five years in federal prison for setting range management fires on their property that spilled over to 140 acres of BLM land.

This past summer, while massive wildfires shot across regions of Montana, the Forest Service—under the direction of Agriculture Secretary Tom Vilsack—restricted the state from using its fleet of helicopters to suppress the fires.

Montana Gov. Steve Bullock, a Democrat, declared a state of emergency and authorized the National Guard to use its resources to aid fire-fighting efforts. But under federal orders, the state’s helicopters remained grounded and the wildfires were permitted to destroy thousands of acres of federally controlled public land and force evacuations of nearby communities.

One Size Fails All?

Citizens and leaders in the West are understandably frustrated.

The Environmental Protection Agency’s devastating—and preventable—spill of millions of gallons of toxic mine waste into Colorado’s Animas River made national news in August 2015. To many, the incident was illustrative of the need for local and state control over managing natural resources and preserving the environment.

The one-size-fails-all bureaucratic ‘solution’ is really the problem. Wildfires resulting from overgrown and diseased forests in the West burn millions of acres every year. We want clean air, water, healthy habitats for wildlife, and vibrant sustainable communities with abundant recreational opportunities. But we’ve been mislead for decades with the notion that in order to have those things our precious natural resources need to be managed by federal bureaucrats thousands of miles away. Obviously that's not working well at all.

Marjorie Haun is a Colorado resident and freelance writer who focuses on state policies and good government.