Couched in terms of avoiding future conflict, the BHA portrayed its petition as being “proactive” and forward thinking, attempting to regulate a future that hasn’t yet come to fruition. At its core, though, it equates to another “lock-it-up” land grab from the political left, this time on public waters instead of public lands. The proposal is based on conjecture rather than evidence. 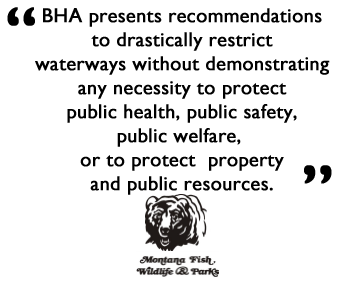 Hundreds of concerned outdoor enthusiasts have flooded the Commission’s hearing rooms to voice opposition. Unfortunately, Commission members are appointed by the Governor, not elected by the people. As such their level of accountability to the people is nothing like that of an elected representative. Regardless of the extent of public comment against it (as well as the fact that the terms of several Commissioners have currently expired), the Quiet Waters Initiative is still very much on the table and the Commission may still make it a miserable reality.  (The public comment period ends on February 12, 2017.)

Drastic Restrictions Unwarranted, According to FWP

Back in May 2016, the Montana Department of Fish, Wildlife and Parks (FWP) recommended that the Commission should not approve the BHA petition. In reviewing it they said:

When the Department of FWP was queried during the May hearing, they stated there were no documented incidents in the affected districts to warrant this initiative, and the agency recommended that the Quiet Waters Initiative be denied.

It seemed strange that the Commission was compelled to vote unanimously in favor of the BHA petition anyway. Richard Stuker, Vice Chairman of the Commission, was present at the public forum held in Great Falls on January 11, and according to news quotes, Stuker now says that he would vote differently:

That is one of the things we were told originally there was a lot of safety issues and maybe there are on certain streams, little streams, little sections…If that was what we were voting on, I think it would be a totally different vote.

In an interview with the Daily Interlake, the statewide chair of the BHA bizarrely represented the organization’s Quiet Waters effort (e.g. of utilizing unelected commissioners to impose a statewide rule) as “the most democratic way” for government to act. John Sullivan is quoted as saying:

I don’t want to see a legislator who has no rights to legislate how Fish, Wildlife and Parks manages the land tell them what to do… That’s the most democratic way, really [The Quiet Waters Initiative], so everybody has the right to voice their opinion about it and the commission will enact what they feel is in the best interest of the public. (emphasis added)

The view that an unelected Commission is somehow more “democratic” than bringing the issue before the individuals who were duly elected by the people of Montana is about as backward as you can get. Maybe Sullivan should retake Civics 101 and pay attention to the part about the role of elected representation.

As with many initiatives, they are not fully vetted for the impact they would have on communities, not to mention the bureaucracy that would be needed to enforce these new regulations.

The Backcountry Hunters and Anglers make some assumptions about the effects of motorized use on public waterways in their proposal, but do not back those statements up with any scientific documentation.

The determination that this amendment would “not significantly and directly impact small businesses” is simply not true. In fact, if adopted, this would have a detrimental effect on many local and regional businesses.

A deeper look reveals all of this is beyond mere coincidence: it smacks of yet another occasion where powerful special interest groups are attempting to advance a nefarious agenda through the backdoor — in this case, the FWP Commission.
There are five members on the commission, but three whose terms expired on January 2, 2017. One of the five commission seats has been vacant since last year.

One Commissioner, Gary Wolfe, was hired as the Executive Director of the Cinnabar Foundation in March of 2015; he was a member of the FWP Commission at the time. In his position with Cinnabar, Wolf awards grants to Green Decoy groups, including the BHA.  Wolfe receives a salary and expense reimbursement from the Foundation.

According to Wolfe’s disclosure in the May 12, 2016 hearing, the Cinnabar Foundation gave BHA a financial grant ($3,000 – an amount undisclosed during the hearing) to implement the Quiet Waters Initiative!  Montana Trout Unlimited, also a supporter of Quiet Waters, was awarded $5,000 for a “Montana Water Project”.

Here’s where it gets really slippery…  The Chair of the Cinnabar Foundation where Wolfe is Executive Director is none other than Robin Tawney. Not coincidentally, her son is the infamous Land Tawney, also of BHA notoriety and the Chair of “Sportsmen for Obama”, and is one of the left’s most shadowy political operatives. Tawney was instrumental in the election of Governor Steve Bullock: yes, the same Governor who appointed Wolfe to the FWP Commission. 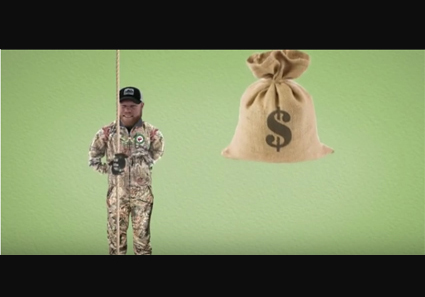 In an article about secretly funded “sportsmens” groups, Tawney told High Country News: "If you help get a champion elected… that's when the true power starts to come."

Surely conflict of interest laws are intended to attempt to ensure that motivations are not skewed in the wrong way – why would we bother otherwise?  Yet Commissioner Wolfe clearly does have a conflict, and the Commission has thus enabled an entanglement of special interest groups like BHA with its agenda.

Perhaps most worrisome for Montanans is the dangerous precedent established by the Quiet Waters Initiative, and the way Governor Bullock’s hand-picked FWP Commission is operating. The governor ran his campaign on the pretense of being the guy who would protect access to public land and waters.

In this case, financially co-mingled special interests and the FWP Commission have engaged in an attempt to widely control the use of Montana’s waters, without the inconvenience of an open legislative process and debate. In May 2016, the FWP Commissioners “quietly” voted to begin the rules process on the Quiet Waters Initiative. Public hearings did not begin until after the governor’s re-election. Even with the guise of “public meetings” and allowing public comment, in the end the Commissioners are under no obligation to follow the people’s directive.

Not surprisingly, a growing number of Montana sportsmen and women are alarmed and outraged. When it comes to Montana’s public lands and waters, Bullock and his allies are self-proclaimed saviors, but in reality they thrive in the lucrative, shadowy back currents of the “Lock It Up” movement.