Recently, an extremist group leveled dishonest attacks against UT Rep and ALC President Ken Ivory, in an effort to shut down legitimate debate concerning the Transfer of Public Lands. This week, UT Representative Kay Christofferson published a great op-ed in the Deseret News that puts this situation in its proper perspective.

My view: Honest debates are worth the dignity, integrity of Utah and its citizens 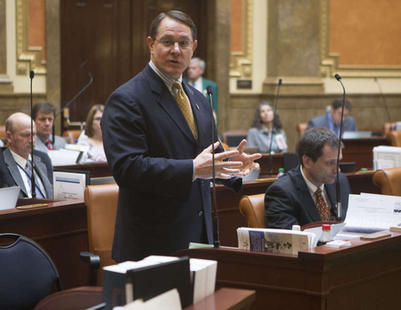 Recently, a Washington, D.C.–based organization, Campaign for Accountability, made allegations of fraud toward a member of the Utah State Legislature, Rep. Ken Ivory. Ken organized and leads the American Lands Council, ALC, which coordinates efforts to help the Western states gain control of federally owned lands.

A radical group posing as a public interest organization — and attempting to obstruct any productive use of federally controlled lands in the West — has chosen to level these accusations rather than engage in honest debate. This is simply a tactic, one that we’ve seen over and over again from such groups, which is meant to diminish the progress of Rep. Ivory and many others involved in helping our state recover control of our public lands as promised in Utah’s Enabling Act. The motives of those involved in the transfer of public lands debate have been questioned and the facts distorted in order to undermine progress towards this goal.

I have known Ken Ivory for nearly three years and I know that he sincerely desires the best for our state. I have found Ken to be tireless in learning and understanding the history of the Enabling Act of Utah and the laws that govern the territories of the United States as they filed for statehood. He has promoted fairness among the states by highlighting the doctrine of equal footing.

In 2012, Rep. Ivory sponsored HB148, calling on Congress to transfer public lands as promised in the Enabling Act. This bill was passed by overwhelming supermajorities in both the Utah House and Senate and was then signed by the governor. The objective of HB148 cannot be accomplished simply by passing a bill, though; it takes tremendous effort and time to collaborate with the many entities involved in these lands so the process can be done effectively, orderly and efficiently.

Whether you agree with the initiative or not, Rep. Ivory has acted honestly and unselfishly. This effort has come to take so much of his time that he was no longer able to sustain his law practice. He chose to give up a career where he had been compensated substantially more in order to promote a cause that he believes to be just.

This type of dedication is precisely what we should want in our leaders — the willingness to sacrifice personally to pursue the greater good. Rep. Ivory receives a greatly reduced compensation from ALC, with funds paid by members who are also supporters of this initiative. They understand completely what their financial commitment means. There is absolutely no deception regarding the purpose or the means used to accomplish the objective.

While it may be easy to prejudge Rep. Ivory based solely on these allegations, it might be wise to understand that these groups count on taking advantage of the bully pulpit afforded them by the media. They realize that headlines are often assumed to be the whole story and few, even among journalists, bother to examine the evidence and look at the details surrounding such accusations.

Who is Campaign for Accountability? How are they funded? Who are their members? How are they compensated? What have they been involved with in the past? Responsible, engaged citizens ought to ask these questions and then talk with people who are knowledgeable about both sides of the issue before arriving at a conclusion.

I know Ken and have seen him in action. He is a person of great character, honesty and patriotism. This device, used to undermine the credibility of an opponent instead of debating the issue, is meant to shut down discussion and to intimidate. It is something you should expect by some national groups who understand dirty politics, but it is far beneath the dignity and integrity of the great state of Utah and its citizens.

Rep. Kay Christofferson was elected to the Utah House of Representatives in 2012, representing District 56. He is a civil engineer and recently retired as president of Sunroc Corporation. He resides in Lehi with his wife, Suzanne.

Always welcome an honest and respectful debate of the issues that face us in this critical time. You need never be afraid of the truth...only of those who seek to hide it with sensational headlines intended to deceive.