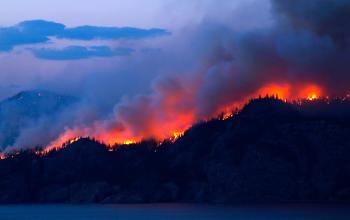 The staffer left the federal wilderness area as fast as he could. Unfortunately, the fire did the same. Although federal law allows firefighters and equipment into no-vehicle lands protected by the Wilderness Act of 1964, crews and equipment were unable to get to the Grizzly Bear Complex Fire until its 18 lightning-caused fires had consolidated into a firestorm that spread into the surrounding Umatilla National Forest and adjacent state and private forest lands.

By the estimated containment date of October 21, the Grizzly Bear Fire had devastated 82,659 acres and was still burning, and this was just one of the many fires experienced in Washington State in 2015, which experienced a record-setting year of forest fires. Fires in 2015 left more than 1 million acres scorched in Washington State, cost $253 million, and killed three firefighters.

Nationwide, 2015’s fire season was among the worst in history, with 9.8 million acres burned. Part of the reason was a firefighter shortage. The situation was so desperate in one case the National Guard was called in. The U.S. Forest Service spent more than $1.7 billion battling wildfires, hit by the quadruple blow of long-term federal forest mismanagement, drought-parched soils and trees, multiple lightning storms, and high winds whipping small fires into virtual explosions.

Ten days after the Grizzly Bear inferno escaped southward over the Oregon border, the lightning-ignited North Star Fire roared northward toward homes in Aeneas Valley, a Washington hamlet about 50 miles from the Canadian border. This time, a crew of Forest Service firefighters returned to familiar ground, a stretch of Ponderosa pine they had deliberately burned in the cool, wet spring to clear out undergrowth. At this thinned-out fire break, they stopped the northern advance of the North Star wildfire.

Forest management and wildfire control has been a playground for anti-technology propagandists since the Clinton administration’s 1995 Wildland Fire Management Policy. Rewilding groups fight any mechanical thinning or pretreatment of overgrown firetraps each fire season, arguing human interventions in the forests are contrary to the 2001 revision of the1995 fire policy, which states, “Wildland fire, as a critical natural process, must be reintroduced into the ecosystem.”

Ideology has trumped practicality at federal agencies with responsibility for the nation’s public lands. Although wildfires are inevitable in every forest ecosystem, the size, intensity, and harm caused annually by the past two decades’ wildfires have been greatly intensified by radical environmentalists’ influence on government forest policy. The victory of “green” ideology, combined with decades of federal mismanagement of government forests, has resulted in tinder-box conditions on more than 190 million acres of public lands now at risk of catastrophic fires, including 60 percent of our national forests.

Lobbying efforts made by radical environmentalists and lawsuits forced a rapid decline of logging in national forests, and the consequent closing of thousands of miles of logging roads has made it impossible to reach fires quickly with equipment and manpower.

Congress and the public should bring the forces of anti-technology ideology to account for their role in bringing on wildfire catastrophes.

Ron Arnold (arnold.ron@gmail.com) is a free-enterprise activist, author, and commentator.