According the U.S. Sportsman's Alliance, sportsmen donate more than $440 million to wildlife conservation efforts each year. True sportsmen care deeply about wildlife. We not only respect the magnificent animals we love to see and sometimes hunt, we know if wildlife and their habitat is not managed well, populations suffer and hunting opportunities are lost.

We at American Lands Council greatly value the right to hunt, fish, trap, and otherwise enjoy all our public lands in a responsible manner. We understand the importance of striking a thoughtful balance that delivers a healthy environment, diverse outdoor recreation opportunities, and sustains the land-based livelihoods that support our families.

Sadly a variety of very powerful groups are working hard to tip the scales in a horrific sense. They push for more restrictions to halt the wonderful benefits that come from wise stewardship of our resources. They push for the obliteration of access roads and trails. They push to to do away with beneficial hunting, fishing, and trapping as wildlife management tools. They push to lock up our lands while we fight to keep our public lands open and accessible. And they have a terrible habit of telling everyone just the opposite.

This fall animal rights activists hope to prey on Montana voters, asking them to ban all public trapping on all public lands in the Treasure State. The American Lands Council agrees with the growing number of professional wildlife biologists, sportsmen's organizations, ranchers, and farmers who warn that passage of I-177 (the anti-trapping ballot initiative) will not only restrict sportsmen's use of public lands, it will cause dangerous predator populations to skyrocket out of control -- endangering citizens and devastating livestock and big game populations.

The vast majority of public land in Montana, upwards of 25 million acres, is controlled by a federal government that is dominated by wealthy special interest groups and distant, unaccountable bureaucrats. In fact, over half of all land in western America is under control of a largely out-of-touch Washington DC.

This month, the Alaska Dispatch News reported on a recent decision by federal agents at the U.S. Fish and Wildlife Service who sided with anti-hunting groups to severely reduce predator control in Alaska. Keep in mind that Alaska contains extraordinarily high populations of wolves and bears. In part, the Dispatch reported:

Young issued a press release Wednesday condemning the rule, calling it a "unilateral power grab" that undermines promises made by the Alaska statehood compact.

When states lose their rights, individuals lose their rights. State officials are created when individuals in the community elect people from their community whom they feel best represent their wishes. Those people get together and get input from countless professionals who know the unique needs and desires of their state. As citizens of their state, they are the most qualified to determine how to run the affairs of their state. No matter which state we live in, our lives and livelihoods are dependent upon good management of the resources within our state. And because our state representatives are relatively local and more accessible, when constituents feel that they are no longer being represented properly, we have the power to replace those individuals with someone who will represent them. Trying to take back your power from a distant, federal official is far more difficult. Our states are best managed by those who live here, breathe here, work here, and yes...hunt here.

Whether you hunt for your own food, or allow others to do it for you, the fact remains that states are independent, sovereign entities. We have, guaranteed to us in the Constitution, the right to manage almost all affairs within the borders of our own state. The federal government is supposed to be limited to the powers "few and defined" given to it by the states. But unless and until we the people and our elected representatives step up to protect the lawful jurisdiction of our states, we will continue to be the most hunted prey this season, and for several seasons to come.

Visit www.AmericanLandsCouncil.org to learn more about our quest to restore a constitutional balance to ensure our public lands are managed in a more accountable way. 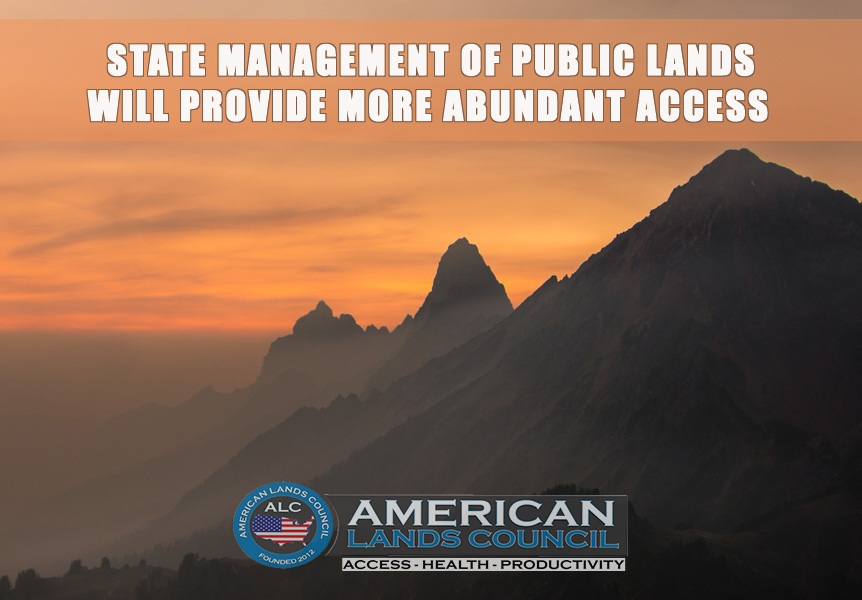