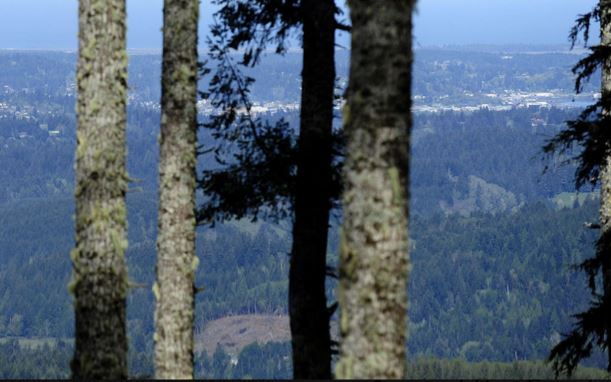 And it's not just the executive director of Healthy Forest, Healthy Communities who feels this way.

“It's a bottom-down plan from the folks in Washington, D.C., and it is essentially a box that some folks back east want to check before their jobs turn over in January,” Smith said. “Essentially the pace and speed of this plan is so they can adopt a management plan before the President leaves office.”

Believing the RMP violates the O&C Act, Smith said it hurts the counties and communities that are most vulnerable and most dominated by land and federal ownership.

Look no further than Coos County, which now receives a fraction of the timber revenue it once did under the O&C Act.

“When you look back, we used to get $5-6 million and if you'd look at today's dollars, that's more like $10-12 million,” Coos County Commissioner Bob Main said. “We'd have a full jail of 250 beds, full complement of deputies, a few more people in the clerk's office and other offices.”

Main said county employees, excluding Coos Health and Wellness, have decreased from 530 to about 270, and it's the same story in Douglas County.

The counties object to how the BLM has characterized the harvest levels.

Under the BLM's most recent analysis, it is capable of producing 400 million board feet of timber per year under the Northwest Forest Plan, composed of 277 mmbf in sustainable yield and 123 mmbf in thinning.

Besides reducing the land base to 19 percent, the proposed plan offers to produce 278 mmbf, composed of 203 mmbf in sustainable yield and 73 mmbf in reserves, which is not sustainable over the long-term.

“We'd be all better off if this thing got scrapped and we operated under the Northwest Forest Plan for the very short term,” Smith said. “If you're continuing to shrink the land base for management and trying to reach a certain volume goal, that's going to dictate the kind of management you're going to try to do. In this case, they're going to have to hack the heck out of some forests in the northern part, but if we're able to manage on a larger land base, especially down here, we don't need to do the heavy-handed type of management.”

Based upon the proposed plan, there is a drastic change in the regional distribution of harvest volume.

Salem and Eugene will see a 24 percent increase, while the southern and coastal districts will decline 52 percent.

The Coos Bay district's volume alone will decrease from 68 mmbf to 30 mmbf.

But with Coos Bay's land base shrinking, the land isn't exactly conducive to the results the BLM is hoping for.

The American Forest Resource Council said the plan won't have any effect on spotted owl population.

Despite reduction of harvest levels, spotted owl populations have decreased from 55-75 percent since 1992.

If the lands are not generating revenue to maintain the roads, there's also reduced access and recreation value.

“When you reduce forest management activities, you're not cutting timber, generating timber revenue receipts so it means closing roads,” Smith said. “The federal government has a $14 billion road maintenance backlog for forest roads in particular.”

What's been particularly frustrating though for all the different entities is that they've felt they've been excluded from the process.

The BLM's draft RMP had five different alternatives, but they did not reflect the changes or scenarios important to counties or logging entities.

From the O&C Act to the Northwest Forest Plan and to the current implementation, timber harvests and acreage for sustainable harvests have shrunk, impacting jobs and support for public safety.

And it's here and now that something needs to be done because if the new resource management plan is implemented, things will look even more dire.

From the O&C Counties' perspective, they have two paths: litigation and congressional influence.

"There is a balance to be found, and we need our congressional delegation to get there," Smith said.

Sen. Ron Wyden also echoed the need for a congressional solution in his response to the plan.

The Association of O&C Counties has already announced its intention to fight the resource management plan in court upon its release.

Before it gets to that point though, there is hope Gov. Kate Brown will step in and oppose the plan in her Governor's Consistency Review.

"Gov. Brown has the opportunity to essentially appeal whats in the plan," Smith said. "Gov. Kulgonoksi used his position to engage in the consistency review process with the WOPR. We hope Gov. Brown is interested in protecting the economy and rural forest areas."

But if does have to go court, Main said he's 75-80 percent confident they will win. What that change might mean though is anyone's guess.

“If the delegation worked together and achieved a solution that I think represents all the values we've come to expect, which is not just timber production, but it's recreation, wildlife and clean water, we'd be on a better and more sustainable path than what the BLM is putting us on,” Smith said.