California to Burn "Around the Clock" to Battle Dead Tree Epidemic 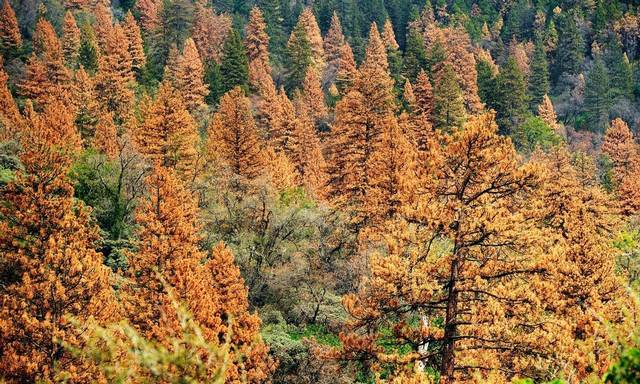 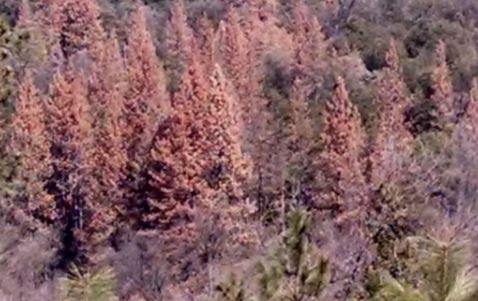 as published by Associated Press

California's drought and a bark beetle epidemic have caused the largest die-off of Sierra Nevada forests in modern history, raising fears that trees could come crashing down on people or fuel deadly wildfires that could wipe out mountain communities.

Aerial images show vast forests that have turned a rust-color. The epidemic has killed an estimated 40 million trees since 2010 in the central and southern Sierra, and it's spreading north.

Officials who are cutting down and stacking the most dangerous trees in piles across six counties, however, say they are stumped by how to get rid of them all.

One solution is to fire up a fleet of 10 large, mechanized incinerators the state recently purchased. Promoters say they burn so hot that they spew little if any smoke, making them environmentally friendly.

Environmentalists contend the burners undercut an emergency order by Gov. Jerry Brown — considered a global leader in the fight against climate change — who called for sending the trees to biomass plants and converting them into energy.

Chief Ken Pimlott, who manages the state's response to the die-off as director of the California Department of Forestry and Fire Protection, defended the air burners as one of many tools.

He acknowledged the burners will contribute to air pollution, as with any work in the forest, but much less than a large wildfire, which the air burners may prevent by removing dead trees.

"We could have a catastrophic wildfire in any of these communities," he said, adding that sending trees to electricity-generating plants remains a priority. "We have to be aggressive in terms of protecting life and property."

Called air-curtain burners, the 20-foot long, steel containers blast a sheet of air over the open top, disposing of up to eight trees an hour. The state bought them for roughly $1 million, part of a $5 million investment in equipment to meet the epidemic.

A lack of visible smoke, however, doesn't mean the air burners are clean, said Chad Hanson, a forest ecologist at Earth Island Institute's John Muir Project. He called them a waste of taxpayer money and a misguided approach to managing California's forests.

"You're still pumping a lot of greenhouse gases into the atmosphere," Hanson said.

Living trees absorb and store carbon dioxide, a major source of greenhouse gases, which is released again when the wood is burned. Hanson said he favors leaving the trees that need to be cut down on the forest floor to naturally decompose as wildlife habitat.

He urged Brown to withdraw the emergency declaration, fearing that it would increase logging of dead trees that forests need to replenish. Hanson added that dead trees don't fuel more fierce wildfires as commonly believed.

A beetle epidemic in forests of the Rocky Mountain states was blamed in 2013 for contributing to Colorado's second largest wildfire, forcing entire communities to be evacuated, said Jeff Mai, aerial survey manager for the U.S. Forest Service based in Colorado.

Officials removed some trees throughout the region that threatened people, selling them as lumber products like fence posts. Most were left to decompose naturally. Mai said that in California, bark beetles have killed five times more area of forests than in Colorado.

It's unclear how many trees in the Sierra will be cut down. Officials say the first job is removing those that threaten motorists and mountain communities.

Declaring the emergency on Oct. 30, Brown formed a task force, including representatives of the energy industry and environmentalists, that is charged with carrying out the order, which emphasizes sending the trees to biomass plants that turn agriculture and tree waste into electricity.

That has moved slowly because California's few remaining biomass plants are closing as utility companies turn to cheaper sources of solar and wind.

Another solution to turn the dead trees to lumber has hit obstacles because they quickly deteriorate, and beetles carry a fungus that stains the wood blue, diminishing its value.

Urgency for residents at the heart of the tree epidemic remains high as California enters another potentially explosive wildfire season.

CalFire plans to start running the air burners around the clock this fall.

An environmental benefit of the air burners is that they eliminate the soot, a major contributor to climate change, said Norbert Fuhrmann, vice president of Air Burners, Inc., the device's Florida-based manufacturer.

Jim McDougald, a CalFire division chief in Fresno County overseeing the burners, said he prefers turning the trees into energy, lumber or opening undiscovered markets to give them value.

But the air burners are one means for the state to get rid of trees in the massive die-off that's changing the Sierra's landscape for years to come, he said.

"This is bad," said McDougald, standing at a lookout point south of Yosemite, where a few patches of dead trees two years now dominate the vista. "It'll never come back — not in our lifetime."