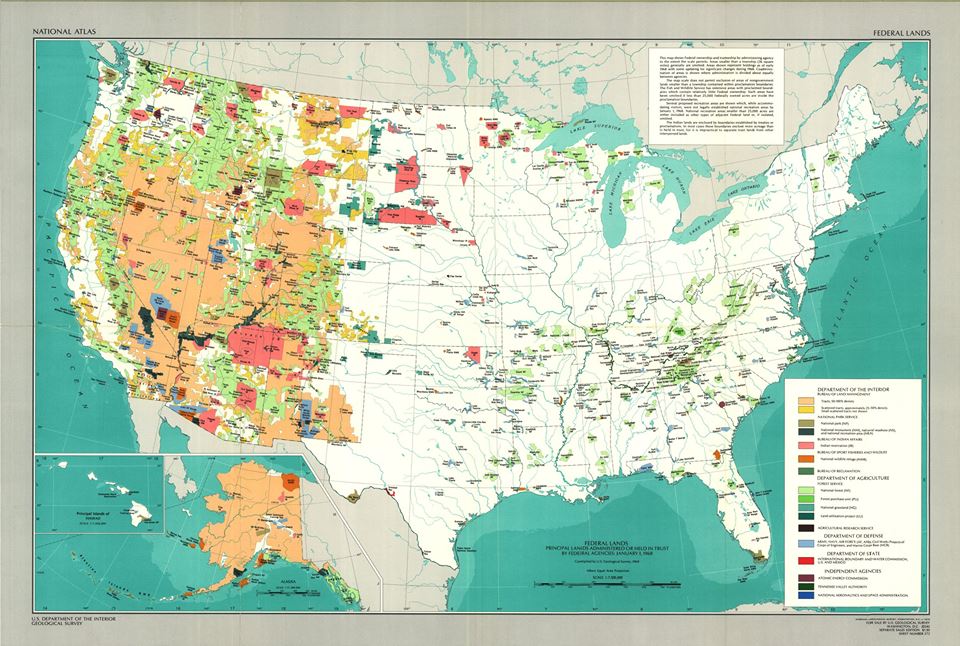 as published by Daily Caller

Most Americans are probably unaware the federal government owns almost one-third of the United States, or 640 million acres. This enormous amount of federal land has profound impacts on the ability of many states, municipalities and communities to govern themselves effectively, raise taxes necessary for basic services, such as police, fire and schools, conserve the environment, and maintain viable economies that can provide living wages for ordinary people.

Some Americans, however, have realized so much federal land in a democracy, for which private ownership of property is necessary, is an anomaly. “The public lands of the United States exceed the combined areas of Germany, France, Italy, Belgium, Holland, Switzerland, Denmark, Austria, Hungary and Albania. Where socialized ownership of land is concerned, only the U.S.S.R. and China can claim company with the United States.”

Most would guess the famous person who made this observation is an advocate of limited government and private land ownership. Most would not guess that it was none other than John Kenneth Galbraith, the late economist who gained renown as a leading advocate of large, centralized government. That even someone like Galbraith made this observation is a telling indication of just how anomalous it is for so much land to be owned by the U.S. government. What Galbraith did not mention is the environmental devastation that results from so much national land ownership, which has been well documented in many scholarly publications about China, the Soviet Union and post-Soviet Russia and other similar countries.

It is difficult for most Americans to grasp just how much land the federal government owns, much less the social, economic and ecological implications of such ownership, because they live in urban areas far removed from regions with lots of federal land. It is even harder for most people to understand that huge amounts of private, state, municipal and federal land is overlaid and in many cases encumbered by a wide range of federal regulations.

Fortunately, there is now a powerful and easy-to-use tool to help people understand this. The Committee on Natural Resources of the U.S. House of Representatives created an online “Federal Footprint Map.” The map consists of many “layers”, each representing land and water managed by a particular agency or overlaid by various federal regulations. Users can select particular layers to be displayed. Users can also zoom in to create higher resolution images and “click” on the map with mouse, which results in a “pop-up” window with a wealth of information on the land and water owned and regulated by federal agencies. The saying “a picture is worth a thousand words” is especially true for the Federal Footprint Map.

“Whether they know it or not, every person is affected by the mammoth federal land ownership in this country,” Bob Bishop, Chairman of the House Resources Committee, stated. “The Federal Footprint Map will help bridge this understanding, and will play a vital educational role as Congress evaluates and responds to executive actions and debates related policy reforms.”

Many U.S. states and municipalities with large amounts of federal land are heavily dependent on natural resource-based jobs, such as agriculture, ranching and mining. But large amounts of federal land are problematic because this hamstrings states’ and municipalities’ economies and hampers natural resource conservation. Over the last several decades, however, federal policies and litigious land use control groups have increasingly restricted commercial use of natural resources on federal land. This is especially true for land managed by the Bureau of Land Management and U.S. Forest Service, which constitutes almost 70 percent of all federal land and is supposed to be available for multiple uses, including logging, wildlife habitat, grazing, mining, and recreation.

These increasing restrictions have devastating effects on the economies, social fabric and ecology of many rural communities. While the federal government provides counties something called Payment in Lieu of Taxes, to compensate for federal land that can’t be taxed, this is frequently insufficient to offset enormous amounts of, and increasing restrictions on, federal land. Communities are further harmed by increasing restrictions of private and state land due to federal environmental policies for things like endangered species and wetlands, and a downward, self-reinforcing spiral results; reduced tax bases, diminished services, poorer schools, fewer jobs, and, ironically, environmental harm. Conservation of natural resources depends on the active involvement of people, not a hands-off approach.

A recent example of many of these issues is the September 2015 decision by the Interior Department regarding the greater sage grouse, a ground-dwelling bird the size of a chicken that ranges across 171 million acres in 11 western states. Instead of proposing to list the bird under the Endangered Species Act, the Department promulgated 15 amended federal land use plans that will likely have many of the same effects of listing under the Act. At their core, the amended plans consist of land and resource use restrictions that will severely impact communities and conservation: withdrawing 10 million acres of federal land from mineral exploration and mining; paving the way for eliminating grazing on 11.2 million acres of Sagebrush Focal Areas; severely restricting use of 24.3 million acres of Priority Habitat Management Areas; and restricting use of the remaining 37.3 million acres under the plans.

Harming businesses and communities by restricting use of natural resources will also end up having the unintended consequence of harming the sage grouse. Successful sage grouse conservation depends on active, healthy communities and landowners that can afford, literally, to help the bird and to do so willingly. Communities and people under duress from federal agencies and pressure groups bent on pursuing a heavy-handed, punitive approach to sage grouse conservation will be increasingly reluctant to help the grouse. If someone is worried about whether they will be employed or if they will have to sell parts of the family ranch to stay afloat and put food on the table, helping the bird that is causing their problems is the last thing on their minds. Also, as is likely based on documented patterns that have emerged during the forty-two year history of the Endangered Species Act, landowners are likely to take actions to reduce the risk of sage grouse-related land and resource-use controls by quietly getting rid of the grouse, as well as degrading and destroying its habitat.

Such is the zero-sum game of federal land use control and ownership.

There are a number of potential solutions, the most substantive of which involve decreasing the amount of land owned by the federal government. There is simply too much land for the federal government to manage responsibly, which is one of the reasons why federal lands are prone to degradation. For example, almost all large wildfires originate and occur on federal land, much of which is filled with too many dead and diseased trees due to a century of federal mismanagement and environmental pressure groups opposed to cutting trees. Over the past three decades, the number of wildfires in the U.S. has remained fairly consistent, but the average number of acres burned annually has increased substantially and the average size of each wildfire more than doubled, according to recent research by Reason Foundation. In 2015, 9.3 million acres of forests burned in wildfires, and since 1960, when the federal government began collecting nationwide wildfire statistics, the only other years that exceeded 9 million acres burned were 2006, 2007 and 2012.

By contrast, state lands, especially those mandated to be multiple-use and produce income for basic services, such as schools in a number of states, tend to be better managed and ecologically healthier. Research by Property and Environmental Research Center has shown this to be the case for forests in Montana.

There is a growing call, led by the American Lands Council and Representative Ken Ivory of Utah, to transfer some federal lands to states so these lands can be managed more responsibly. Since 2012, ten western states have passed legislation examining or calling for the transfer of portions of federal lands to states. At the very least, there should be  no net loss of private property in the U.S., instead of the ever-growing amount of federal land due to constant federal land acquisition. Or the U.S. can continue to emulate China and the Soviet Union/Russia and reap the bitter harvest of the ongoing degradation of one-third (and increasing) of America.