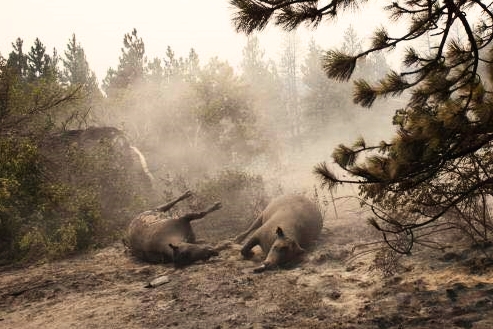 This commentary was published by Healthy Forests, Healthy Communities

The U.S. House Natural Resources Committee’s ranking member, Rep. Raul M. Grijalva, D-Ariz., is holding a forum on the "growing anti-government extremism on public lands."  Grijalva says the forum will discuss the emergence of this movement and the government’s efforts to confront these dangers, and has invited the public to send comments on the issue by June 10. Skamania County Commissioner Chris Brong submitted the following response, which we're publishing with his permission:

To: The Honorable Democrat Representatives on the House Natural Resources and Homeland Security Committees.

If the forum’s purpose is to counter “or reduce” extremism on public lands, it will not be accomplished through more federal uniformed officers or Special Agents.

I may be uniquely qualified to address this forum since I enforced federal environmental and land management laws and regulations on the federal public lands for most of my adult life; and, state and county environmental laws.

I have been a member of the Federal Law Enforcement Officers Association (FLEOA) since 1983; have had a 33+ year federal law enforcement career as a US Forest Service (USFS) Recreation Technician, Corps of Engineers (COE) Park Ranger, Bureau of Land Management (BLM) Law Enforcement Ranger, BLM Special Agent, and a Fish and Wildlife Service (FWS) Special Agent working in 5 western states, Maryland, and the District of Columbia; and, several years as a rural Kern County, CA, Deputy Sheriff and a current rural Skamania County, WA, County Commissioner.

Over the past 40 years, Congress has passed several environmental protection laws, including the Federal Land Management and Policy Act (FLPMA), Endangered Species Act (ESA), and the National Environmental Policy Act (NEPA). Under these laws, federal agencies have implemented multiple volumes of federal regulations that have been less than effective in “protecting, preserving, or conserving” the public lands and ensuring the diversity of wildlife habitat. Numerous Environmental Non-Governmental Organizations (ENGO), both regional and national organizations, have filed hundreds of federal lawsuits alleging violations of federal environmental laws by the USFS and BLM, during this period. These ENGO’s have routinely used the federal Equal Access to Justice Act (EAJA) to recover their attorney fees from these federal lawsuits. Most of the federal judges hearing these cases, with little or no background of federal land management laws or policies, have been very sympathetic to the ENGO’s in issuing injunctions and requiring additional redundant environmental assessment on public land agency projects. Meanwhile, our President’s, using the Antiquities Act, have created massive acreage of new National Monuments with little or no concern for the residents of the local communities or elected officials who are most impacted by these designations. Thousands of miles of roads and trails have been closed to the public, used previously for generations, regardless to the concerns of local residents. Grazing leases have been eliminated through federal buyouts and reduced due to lawsuits and agency actions. The recent western fires have increased in size and intensity primarily due to the lack of any appropriate federal land management to prevent future fire intensity, not to so called “climate change.”

The “extremism” danger today is the complete frustration, and lack of confidence, of the rural local citizens and elected officials in the ability of federal land management agency managers to work with and act on the concerns of the local public and officials. It is quite clear that required federal “public comment” sessions do not address the concerns of the local communities. USFS and BLM Managers seem incapable to actively listen, and incorporate any of the concerns or requests of local citizens and elected officials. Presidents, Congress, and federal Judges, have ignored the public land management concerns of the public land communities and their local elected representatives, during this period. The on-going western state debates to transfer federal public lands to willing states has increased, and will continue. The recent federal judge resentencing of the Hammond family case inflamed the continuing frustration, along with the occupation of the Malheur National Wildlife Refuge Headquarters. The extremism that you seek to counter, has been created by yourselves. It can only decrease with appropriate action by you, Congress.
That action must include and require federal land agency managers to engage and adopt the requests of local rural communities and their elected officials, including Sheriffs and County Commissioners, in the management of federal public lands.