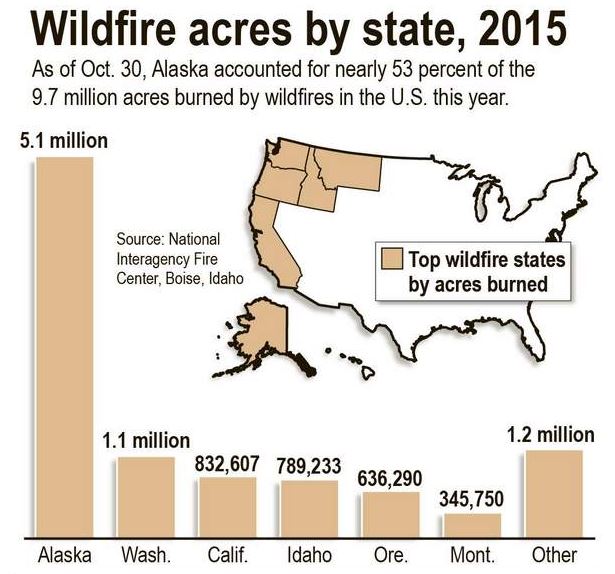 as published by Capital Press

As ranchers throughout the West deal with the aftermath of catastrophic summer wildfires, proponents of legislation to reduce fuel loads in federal forests say there’s a good chance it will pass Congress before the end of the year as part of funding the federal budget.

The Resilient Federal Forest Act of 2015, HR 2647, was introduced by Rep. Bruce Westerman, R-Ark., a professional forester and engineer, on June 4. It was passed by 243 Republicans and 19 Democrats on July 9 and awaits a hearing before the Senate Committee on Agriculture, Nutrition and Forestry.

In short, the bill, at the urging of the Obama administration, allows the U.S. Forest Service to access funds through the Federal Emergency Management Agency for fighting fires instead of depleting non-firefighting funds within the Forest Service budget. The bill also allows the USFS and Bureau of Land Management expedited environmental review of forest management projects — including logging, thinning and prescribed burns — in public forests at imminent risk of major wildfire, insects and disease.

“I probably give the bill in its current form a low chance of passing out of the Senate, but that doesn’t mean components of the bill won’t pass as part of a larger package,” said Travis Joseph, president of the American Forest Resources Council, in Portland, a prime driver among 170 organizations backing the bill. The budget deal passed by the House, Oct. 28, makes possible a continuing resolution or omnibus appropriations package in December that could include the heart of HR 2647, he said.

The administration wants the firefighting funding issue fixed and larger categorical exclusions, known as “CEs,” of the National Environmental Policy Act for forest management have the best chance of passing with it, Joseph said.

The administration approved CEs on up to 2,500 acres in the 2014 Farm Bill and USFS has used them, said Nick Smith, executive director of Healthy Forests, Healthy Communities, in Portland.

Extending CEs to 5,000 acres and even up to 15,000 acres where projects are collaboratively developed by all groups concerned, “are the heart of the bill,” said Smith, a top Republican aide in the Oregon Legislature before forming Healthy Forests, Healthy Communities in 2013.

CEs of 5,000 to 15,000 acres seem small when compared with 60 million to 80 million acres of federal forests nationwide that Smith says are at risk of wildfire, insects or disease. The USFS is only able, he said, to treat 5 percent of that annually.

But Joseph said 5,000 to 15,000 acres actually are “pretty substantial” compared with USFS current practices of treating only 200 acres in a project.

“Depending on funding, it can take a couple of years to complete projects and they can take up to 250 pages of environmental review. This isn’t about taking away environmental protections, but making them faster and more efficient,” said Joseph, formerly a senior policy adviser to Rep. Peter DeFazio, D-Ore.

The USFS harvests about 2.5 billion board feet of timber annually compared with 8 billion to 12 billion annually in the 1960s and ‘70s. It’s 90 percent less than it was 20 years ago in the Pacific Northwest, Joseph said.

There’s also the sheer cost of about $356 million annually for USFS to meet National Environmental Policy Act requirements for projects, he said.

“The USFS is chronically cash starved, going over budget and not having the budget to manage these lands,” Smith said. “It would take decades if not centuries for the USFS to catch up (in forest management), but it doesn’t have the resources.”

As a result of a decline in forest management and timber harvested, there’s a build up of underbrush and thick timber fueling larger and larger wildfires, Smith and Joseph said.

“We need to look at forests more holistically, like landscapes, to make forests more healthy again and agencies need the tools and dollars to do that,” Joseph said.

The bill would benefit rural communities not only in reducing fire fuels but in restoring mills and jobs, he said.

“Sixty to 80 million acres is a pretty steep hill to climb,” Smith said. “The sooner Congress acts on these types of reforms the better.”

It also will take, he said, encouraging the USFS to use its new authority for larger CEs once it gets it. Unlike, prior legislation, HR 2647 does not mandate logging, but allows the USFS to do it. The Restoring Healthy Forests for Healthy Communities Act passed the House in late 2013, but died in the Senate because environmentalists labeled it a logging mandate bill, Smith said. He disagreed that what it was, pointing out logging was required only with certain criteria met.

Joseph said a provision of HR 2647 not likely to make it is one requiring any outside litigants to post a bond before they can sue to halt a project that’s been developed with collaboration of all interested parties.

The USFS has stepped up its reduction of forest fuels, increasing timber harvests 18 percent since 2008 and treating 4.6 million acres for fuel reduction in 2014, the most in one year, USFS Chief Tom Tidwell told the House Agriculture Subcommittee on Conservation and Forestry on Oct. 8.

Tidwell testified the agency needs to keep increasing the amount of acreage it is treating and said 20 projects this year were a result of new authorities from the 2014 Farm bill. He said 16 projects were being litigated, but a bigger problem was lack of bids for 50 sales.

Rod Haeberle, owner of Haeberle Ranch, Conconully, Wash., told the subcommittee lack of bids was due to far fewer sawmills in Washington because of the spotted owl endangered species listing years ago. A steady, reliable level of public sales is needed, he said.

A common opinion among ranchers and timber owners across the West is that wildfires get huge because public lands aren’t logged or thinned and firefighters often use defensive rather than offensive tactics.

The sentiment is summarized by a big sign that went up in Colville, Wash., last spring: “Public lands. Log it, graze it or watch it burn.”

“Graze it. Don’t blaze it” is a slogan in Idaho, said Wyatt Prescott, executive vice president of the Idaho Cattle Association in Boise.

He said he supports anything that streamlines management of resource lands that is too encumbered with rules and regulations.

Compounding the problem, Prescott said, is agencies contemplating what litigation may force them to do.

HR 2647 seems too small and focused on forests, he said. Similar application is needed for greater grazing on BLM lands to keep grass and sod fuels down and he’s working toward that end, he said.

Idaho ranchers said better grazing management would have reduced the size and severity of the Soda fire that scorched 279,000 acres in Owyhee County and part of Eastern Oregon.

Sod was so thick in Washington Department of Fish and Wildlife grasslands from 20 years of no cattle grazing, that it took bulldozers two and three passes to cut fire lines to soil, Nicole Kuchenbuch, Haeberle’s daughter, said in last summer’s 133,450-acre Okanogan fire.

Like other ranches impacted by western fires, the Haeberle-Kuchenbuch Ranch is still searching for missing cattle and dealing with loss of grazing lands that’s causing some to downsize herds. Ranchers’ livelihoods have been severely hurt by wildfire.

Steve Lorz, vice president of Okanogan County Farm Bureau and a former logger, said HR 2647 sounds like a step in the right direction but “only a teaspoon in the ocean” of need.

Even if it passes probably nothing will be done with it, he said.

A large amount of blow down timber was wasted for environmental reasons on the last USFS harvest he worked on two years ago, he said.

“To me they (USFS) have proven for 30 years that they are not able to do anything because basically they are prostitutes to the environmental movement. They throw away millions of board feet of timber and are damn proud of it,” Lorz said.

Smith said he hears a high level of frustration from many people in forest communities over the USFS inability to remove high fuel loads from forests.

“Over the last 25 years,” Smith said, “these communities have been hit hard by fewer logging jobs and now we’re seeing the environmental consequences from declining management where heavy fuel loads are fueling larger and more severe wildfires that destroy not only public forest lands but private timber lands and homes, watersheds, wildlife habitat and recreation lands.”