This week, Utah's governor, Gary Herbert went toe-to-toe with Republican challenger and Chairman of Overstock.com, Jonathan Johnson, in their first and only debate before the Republican Convention to take place on Saturday, April 23rd. Several important issues were discussed, but among the most important was the issue of the Transfer of Public Lands and whether or not the state should move forward in filing suit against the federal government to gain ownership of a large portion of public lands within the state.

This critical issue is a top priority for Jonathan Johnson, who said that if elected as Utah's next governor, he is prepared to follow through with the suit recommended by Utah's legal team, formed by the nation's top constitutional experts and explained in their detailed report released last December.

"It’s time that the state brings a lawsuit to transfer land back to the state," Johnson told a Little America Hotel audience largely made up of Republicans. "I’m ready to bring that suit quickly when I am the governor."

But Herbert fears a lawsuit will be too risky with a Democrat in the White House and feels that Utah would be better off supporting the public lands initiative being advanced by the state's congressional delegation. Herbert's biggest fear seems to be the potential for President Barack Obama to set aside more land in Utah for a new 1.9 million-acre national monument in San Juan County to protect Native American artifacts. He hopes to be able to appease the Obama administration by avoiding the lawsuit, even though it was shown to be constitutional and have tremendous potential by Utah's own legal team.

Governors are obligated to protect the interest of their states, whether the threats come from inside or outside of that state. There are governors such as Texas Gov. Greg Abbot, who is actively taking stands when the federal government seeks to encroach upon the right of the people of Texas. His previous roles as both a Texas Supreme Court Justice and then State Attorney General prepared Governor Abbot to understand the rights and powers of the states and his role as Texas' defender.

In a recent interview with Gov. Abbot, he spoke of the need for states to restore the Constitution of the United States., rather than waiting for Washington to fix Washington.

“Because Washington is so broken, because each branch of the federal government has violated the Constitution, in a way it doesn’t matter who’s going to be elected President. Whoever wins that race is going to step into a system that is broken, and we have to repair the Constitution for whoever becomes the next president.”

We urge all governors of the United States to stand unitedly against every attempt by the federal government to encroach upon the inalienable rights of their citizens; to stand boldly for the Constitution of the United States, which seeks to provide equal footing for all states; and to be fearless in using legal and constitutional avenues for securing those rights to which their citizens are guaranteed, both through that same Constitution and their Enabling Acts upon admission to the Union.

The Transfer of Public Lands is an integral part of maintaining the sovereignty of each state, promised to each state upon its creation. The health, safety and welfare of all states are relying upon the courage of its elected officials to act, rather than to be acted upon. 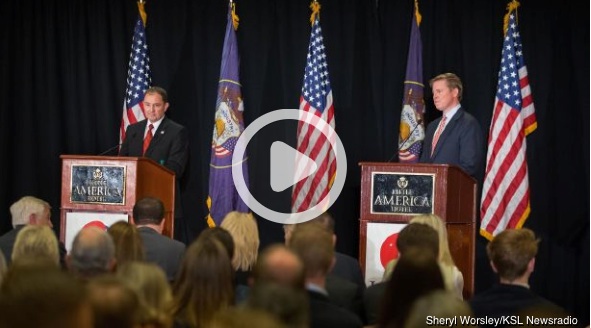