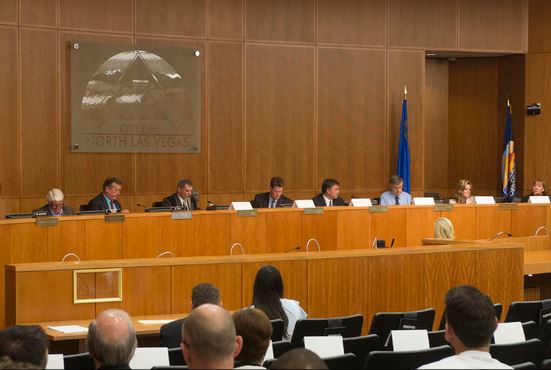 By HENRY BREAN
as published by LAS VEGAS REVIEW-JOURNAL

A flood control agency required to pay royalties on the dirt and rocks that collect in a detention basin. Home builders forced to seek mining permits to move earth on once-public land they bought years ago. A city water plant kept from storing treatment chemicals on site by intractable federal lease restrictions.

Those were a few of the regulatory nightmares highlighted during a special congressional hearing held Tuesday at North Las Vegas City Hall.

Rep. Cresent Hardy and three other Republican members of the House Committee on Natural Resources heard testimony from local officials and fired questions at the state director of the Bureau of Land Management over what committee members painted as bureaucracy run amok.

Steve Parrish, general manager and chief engineer of the Clark County Regional Flood Control District, said the BLM claims ownership of the rocks and soil that flows into one of the county flood detention basins built on land leased from the federal government. His agency either has to wait 90 days for the BLM to evaluate and sell off the sediment or pay royalties on it so it can be cleared away quickly before the next flood.

And Parrish isn’t the only local official who faces a tangle of red tape when building on federal land in the valley. He said the county has to get BLM approval before it can add a new tennis court to an existing park, while the City of Las Vegas has to haul in treatment chemicals to a reclaimed water plant because federal lease restrictions prohibit the chemicals from being stored on site.

Parrish said all these problems could be solved if the land in question was simply deeded over to the municipal governments that have built on them.

“There is no reason the BLM should retain title to these lands that are being used for public facilities,” he told the committee.

David Jennings from the Southern Nevada Homebuilders Association said valley developers are being slapped with fees and fines from the BLM for routine site preparation work thanks to a 2014 decision by the Department of Interior to pursue so-called mineral trespass claims.

Even on land purchased before the new enforcement policy went into effect, home builders now must obtain a federal mining permit before grading the property or risk a trespass notice for disturbing mineral rights the federal government retains even after selling off public land, Jennings said.

Then there is the issue of land availability in a state where roughly 85 percent of property is under federal control.

UNLV economics professor Alan Schlottmann said a lack of large parcels along key transportation corridors in and around the Las Vegas Valley could strangle efforts to lure new industries and diversify the state’s economy. For proof, he cited a study he helped write on behalf of the commercial real estate development association, known as NAIOP Southern Nevada, that found the region needs 12,700 acres for economic development but has less than 9,200 acres worth of large parcels available.

“It seems crazy that the BLM can’t identify enough land for lease or sale to satisfy the needs of the Las Vegas Valley,” said committee Chairman Rob Bishop, R-Utah.

“The testimony today shows working with the BLM in Southern Nevada has become an onerous, expensive and time-consuming process,” McClintock said.

The concerns and criticism come as the bureau works to finalize a sweeping Resource Management Plan that will guide the use of 3.1 million acres of federal land in Southern Nevada for decades to come.

The BLM hasn’t updated its long-range plan for the area since 1998. The current draft has been in the works for more than five years, but it still doesn’t address some of Clark County’s major concerns, said Marci Henson, director of the county’s Department of Air Quality.

Henson told the committee she would like to see the BLM treat local entities as equal partners when it comes to developing such regional plans.

More than 100 people turned out for Tuesday’s 90-minute field hearing.

Environmental advocates blasted the event before it even began. The Nevada Conservation League called it a “sham” and accused Hardy and Bishop of wanting to sell off federal land to the highest bidder.

After taking his lumps at the hearing, BLM state director John Ruhs said it was good to get the problems out in the open, even if the format didn’t always lend itself to detailed explanations.

Ruhs said he is confident that processes can be streamlined and policies tweaked to address some of the issues raised Tuesday.

The bigger stuff, like transferring ownership of federal land to the local entities that are leasing it, will require an act of Congress.