Jurisdiction Jeopardized? Not According to All the Pros

During the 2016 Utah Legislative Session, an important step forward was taken to prepare the state for the time when Utah may be managing their own public lands. With 47 cosponsors, and overwhelming support, HB276 Utah Public Land Management Act sets up some of the organizational structure that will be needed within the state to ensure proper management if the state is successful in compelling Congress to honor the same promises that it made and kept with all states east of Colorado. It would become effective when a minimum of 100,000 acres of federal land is transferred from the federal government to the state of Utah.

HB276 passed both the House and the Senate and now awaits the signature of the governor. However, some who seem intent upon undermining the Transfer of Public Lands now claim that this bill actually is a sort of "bait and switch" plan that somehow undermines the jurisdiction of our local sheriff's. But a careful and educated review of the bill proves that this bill in no way weakens the jurisdiction and power of county sheriffs, and in fact strengthens their ability to protect the citizens within their borders.

When asked about the claim that HB276 may actually harm the jurisdictional power of sheriff's, state legislative research legal counsel gave this thorough and specific reply to Rep. Mike Noel, sponsor of the bill:

I think the blog post (http://www.defendingutah.org/post/2016/03/11/war-on-sheriff) misinterprets HB 276, Utah Public Lands Management Act, in two ways -- first, in regard to DWR’s authority, and second, in regard to the authority of the Division of Land Management (which will only be staffed upon the state receiving control of 100,000 acres of public land).

The second exception to the sheriff’s authority is similarly narrow, and in addition to that, it is not new. Subsection (4)(c) notes the authority of DWR to continue to enforce DWR code -- essentially clarifying that DWR is going to maintain its current role as the primary agency to protect and regulate wildlife in the state.

The final subsection notes that nothing in the bill enlarges or diminishes a state certified peace officer’s duties.

In short, I think the author is simply reading too much into the references to the possible hiring of DLM agents and DWR’s current authority being maintained. I hope this makes sense. Please let me know if you have any other questions.

in addition to the state's legal counsel, the governor's attorneys, the Utah Association of Counties General Counsel, and the Sheriff's Association Legal Liason, all confirm that there is nothing in the bill that would remove the Sheriff as the chief law enforcement officer in the county.

Last, but certainly not least, the following is a letter from the Utah Association of Sheriffs themselves, stating their unified position in support of HB276 as well as Representative Mike Noel, who has been awarded the Legislator of the Year by Utah Sheriff's on two separate occasions for his continuous work to "keep the office of Sheriff as Chief Law Enforcement official for the county." 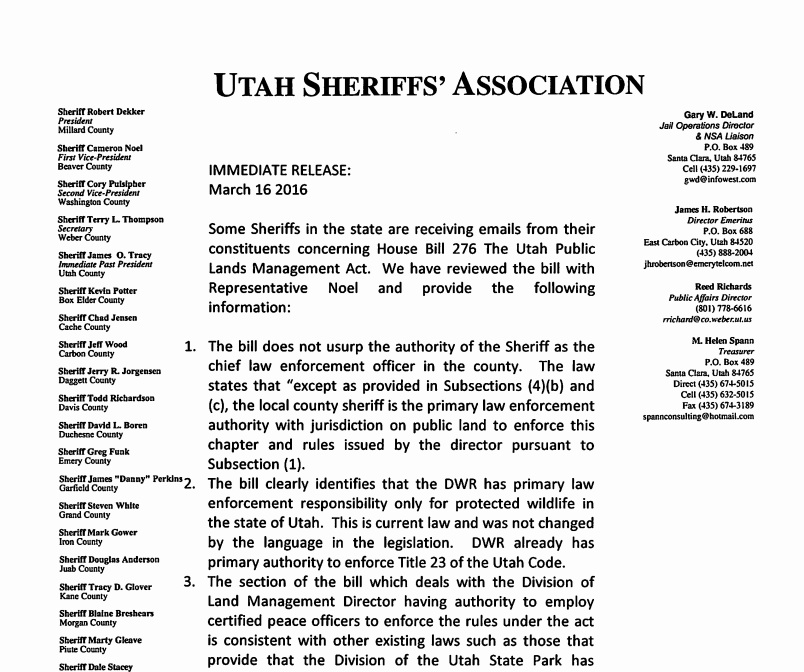