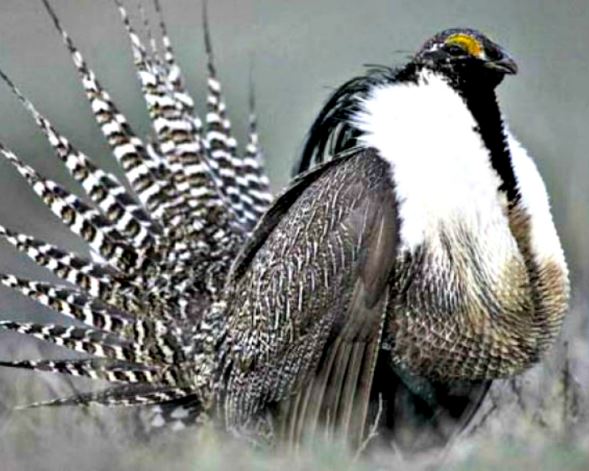 Feathers are flying over whether the federal government is overprotecting a rare bird in Colorado, in what critics grouse is an example of lawyers making millions while abusing the Endangered Species Act.

Trial lawyers who collect taxpayer-funded fees under the law file so many suits that they undermine local conservation efforts in Western states, according to government officials, industry advocates, and legal analysts familiar with the situation.

Over 25 years, Colorado officials spent more than $40 million to preserve the habitat of a paunchy, ground-dwelling, chickenlike bird known as the Gunnison sage grouse.

Colorado officials worked in partnership with ranchers in Gunnison County, who voluntarily entered into conservation easements on their property that protected the bird while allowing for robust ranching activities.

In the past few years, the Gunnison sage grouse population not only has stabilized but increased in the part of southwestern Colorado where they’re concentrated, local government figures show.

Even so, the U.S. Fish and Wildlife Service saw fit to list the species as “threatened” under the Endangered Species Act in November 2014.

Kent Holsinger, a natural resources lawyer based in Denver, says he sees a perverse set of incentives at work that allow green groups such as WildEarth Guardians, a nonprofit environmental group, to file suits that ultimately work against the bird’s environment and the local community.

Under a section of the Endangered Species Act providing for citizen suits, nonprofit environmental groups may bring litigation against the federal government. U.S. taxpayers often foot the bill for the substantial fees the groups pay to their attorneys.

In the U.S. House of Representatives, the Natural Resources Committee has obtained documents from the Justice Department that show U.S. taxpayers paid out more than $15 million in attorney’s fees over four years to cover the costs of lawsuits brought under the Endangered Species Act.

Some lawyers are paid as much as $500 an hour, the documents show.

So long as these litigation provisions are around, it will create openings for habitual abusers of the law like WildEarth Guardians to continuously sue. They are nothing more than a group of trial lawyers who have found a profitable niche to collect attorney’s fees at taxpayer expense and to perpetuate these legal actions that do no good for the environment or for the community as a whole, but they are very good for WildEarth Guardians.

The Gunnison County ranchers entered into agreements with state officials so they could help to preserve the Gunnison sage grouse while obtaining some level of certainty that they wouldn’t be punished for their ranching activities, Holsinger said.

But, he warned, if “radical environmental groups” continue to litigate and put pressure on government agencies to apply more restrictions, especially where public lands are concerned, it could mean ranchers will be forced to sell their property.

“This is about their livelihood,” Holsinger said of the ranchers. “If they are cut back from the status quo, which is a distinct possibility, then their ability to earn a living will be impacted and that means they will have to sell their property, with the most likely purchaser being a developer.”

Erik Molvar, a wildlife biologist with WildEarth Guardians, sharply disagrees with critics of the Endangered Species Act, including the provision for lawsuits,and said he would prefer no major changes.

“Without the ESA, it would be politics as usual and extractive industries would continue to have the right to drive [wildlife] populations into extinction,” Molvar said. “The ESA was created to make decisions based solely on science so politics could not enter into these decisions. This gets us past the political roadblocks to prevent the extinction of rare species.”

In January 2015, WildEarth Guardians and another environmental group, the Center for Biological Diversity, filed separate lawsuits against the U.S. Fish and Wildlife Service. They argued that the listing of “threatened” for the Gunnison sage grouse doesn’t provide sufficient protection and should be raised to “endangered.”

WildEarth Guardians joined in its suit with Clait Braun, a retired sage grouse researcher with the Colorado Division of Wildlife who since 2000 has operated Grouse Inc., an Arizona-based consulting firm that studies the sage grouse. In the second case, the Center for Biological Diversity joined with the Western Watersheds Project.

A few weeks later, Hickenlooper, a Democrat, filed a lawsuit against President Barack Obama’s Interior Department and the agency’s Fish and Wildlife division in an effort to overturn the “threatened” listing. Gunnison County, which is heavily Democratic, later joined with the governor in the suit.

Colorado Democrats “felt like they had no recourse but to file suit against their own party in Washington, D.C.,” and that “shows just how out of touch the Obama administration is with sound public policy,” Brian Seasholes, director of the Endangered Species Project for the Reason Foundation, said in an interview with The Daily Signal.

“For over two decades now, Gunnison County has been engaged in a very successful effort to boost the sage grouse population, but it appears Fish and Wildlife either failed to properly analyze the facts on the ground or simply ignored what the science said about the bird’s population.”

The “best available science” demonstrates that the Gunnison sage grouse “is not threatened throughout its range,” Hickenlooper’s lawsuit argues, adding:

The Gunnison Basin population, which comprises the vast majority of the species, is not presently in danger of extinction, nor is it likely to be at risk of extinction in the foreseeable future. In fact, experts cited in [the Fish and Wildlife Service’s] Final Listing Rule estimated that the risk of extinction over the next 50 years is no more than 1 percent. Thus, [the wildlife agency’s] decision to list the Gunnison sage grouse as threatened was arbitrary, capricious, and not in accordance with law.

“The Interior Department’s penalty-based approach to sage grouse conservation is going to harm the bird while Colorado’s approach, which is incentive-based, cooperative, and draws heavily on partnerships, has a proven track record of helping the sage grouse,” Reason Foundation’s Seasholes said.

In the Event of a Meteor Strike

Paula Swenson, the longtime Democratic chair of the Gunnison Board of County Commissioners, told The Daily Signal that it’s  evident to her that the federal wildlife agency did not rely upon sound scientific data in making its determination.

She points out that for almost 20 years now, the Fish and Wildlife Service has said that the survival of the Gunnison sage grouse is dependent upon the viability of the Gunnison Basin population, located primarily in Gunnison County and in a small part of Saguache County.

In total, there are about 5,000 Gunnison sage grouse spread throughout southwestern Colorado and southeastern Utah, according to federal figures, with about 85 percent residing in Gunnison Basin.

Swenson notes that Colorado Parks and Wildlife, the state agency charged with monitoring and providing science on conservation efforts, has determined that the Gunnison sage grouse population is stable and not threatened in the foreseeable future. Moreover, federal officials at the Fish and Wildlife Service concurred with the state’s findings, Swenson explained in an email:

They also agree that the efforts of our local government, property owners and partnerships with state and federal agencies have sustained this population. However, since the six satellite populations, which combined only make up about 15 percent of the total population, are not seeing the same sustainability numbers that the Gunnison [River] Basin is, the [Fish and Wildlife Service] chose to list this species as threatened. The [federal agency] systematically divided the species into Gunnison Basin and all other populations instead of looking at the species viability as a whole. The rationale provided was all speculation, not science.

Swenson said she was incredulous at the reasoning behind the federal agency’s decision-making.

Molvar, the WildEarth Guardian biologist, said he is not convinced the population is stable. The main population is probably less than 5,000, he estimates, the “bare minimum to have a stable population.”

“Even if you believe the Gunnison Basin is stable and secure, you are still putting all your eggs in one basket,” Molvar said. “One major catastrophe like aWest Nile virus could wipe out the population and drive it to extinction.” “The rationale provided was all speculation, not science,” the Democratic chairman of the county commissioners said of federal officials’ designating the Gunnison sage grouse as “threatened.” (Photo: iStock Photos)

Green Lawsuits Seen as the Problem

John Swartout, a Republican, is a senior policy adviser to Hickenlooper. A bipartisan consensus is emerging in favor of reforming the Endangered Species Act so that it can “live up to its full potential without being so dominated by litigation,” the governor’s adviser said in an interview with The Daily Signal.

The problem is “with the adversarial structure” attached to the law and not U.S. Interior Secretary Sally Jewell or her department, Swartout insisted.

“We have no complaints about the secretary of interior and the people who work with her,” he said, adding:

She has been great to work with and she’s done a lot to be helpful despite the fact that we filed litigation. This has been a bad situation not of her creation. The governor felt like the landowners had done everything we asked them to do and made a superhuman effort. They really stepped up and did everything that was necessary. This isn’t about us being mad at the [Obama] administration. It’s about us having the backs of the people who tried to do what they could to protect the sage grouse.

The Gunnison sage grouse is a close cousin of the greater sage grouse, which resides in Colorado and 10 other Western states.

Federal bureaucrats are making a deliberate effort to subdivide species that have few or no biological differences, said Ethan Lane, executive director of both the National Cattlemen’s Beef Association and the Public Lands Council, an advocacy group for Western ranchers who hold grazing permits for public lands.

“The fact that these [grouse] populations have been split off into separate species is done to create more opportunities for lawsuits and this speaks to a big part of the problem with the Endangered Species Act,” Lane told The Daily Signal. “In order to keep the machine pumping, the litigation factory culture that has taken over the environmental community has found that it’s easy to split off populations that are not really so different.”

The land use plans, set in motion by Interior’s Bureau of Land Management and USDA’s Forest Service, impose limits on where livestock can graze with the intent of creating buffer zones around the sage grouse’s habitat.

State and local officials in Utah, Idaho, and Nevada filed suit to overturn the land use amendments.

Four environmental groups—WildEarth Guardians, the Center for Biological Diversity, the Western Watersheds Project, and the Prairie Hills Audubon Society—filed a suit against the federal government aimed at closing off what they view as “loopholes” in the amendments.

The Denver-based Western Energy Alliance filed a separate suit challenging oil and gas restrictions in the land use plans.