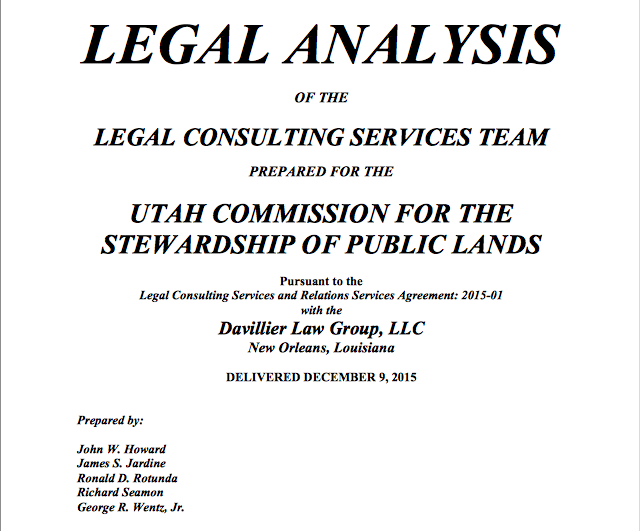 “Utah has been treated as decidedly less than an equal sovereign, a result, as the Supreme Court recently reaffirmed in Shelby County v. Holder, the Constitution does not allow.” Legal Analysis, page 12

This is the conclusion of the team of preeminent constitutional scholars and legal experts from across the nation, which is supported by the 146-page Legal Analysis they prepared for the Utah Commission on the Stewardship of Public Lands that was delivered earlier this month.

While presenting the legal report to the Commission, distinguished constitutional scholar Ronald Rotunda likened Utah and other western states to “orphans” and “second class citizens” deprived of essential sovereign powers of statehood by unsanctioned federal dominion over their lands. This is critical to the nation, he said, because strong, self-governing states “are critical to the internal checks of the Constitution.”

The overall conclusion of the legal analysis is that compelling legal bases exist for the State of Utah to challenge federal ownership of public lands in the state. The findings identify four primary legal theories as having merit:

The constitutional balance between state and federal governments is known as federalism, and is a crucial internal check in our governing system, as Professor Rotunda emphasized, “to protect the liberty of the individual.” Liberty, together with the right and control of property, and the right of local self-determination, is the uniquely American constitutional formula for peace and prosperity.

Click here for a copy of the full Legal Analysis.