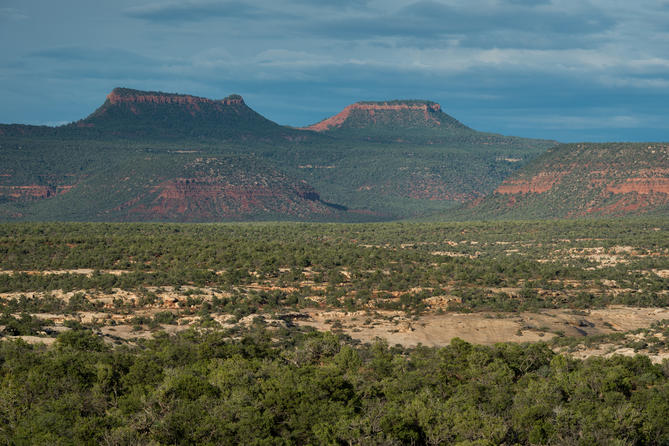 as published by Salt Lake Tribune

New polling indicates Utah voters are divided starkly over whether a Bears Ears National Monument should be designated for the archaeologically rich landscape in San Juan County.

A 39 percent plurality opposes a monument, which President Barack Obama has been asked to designate under the Antiquities Act, while 33 percent support presidential action to protect this region around Bears Ears Buttes, according to a telephone survey of likely Utah voters sponsored by The Salt Lake Tribune and the University of Utah's Hinckley Institute of Politics.

American Indian tribes' proposal for a 1.9-million-acre monument has spurred an impassioned debate over public-lands management and local influence over major conservation initiatives that could make tens of thousands acres off limits to development and motorized use. The tribal proposal, developed by the nonprofit group Utah Dine Bikeyah, calls for preserving traditional uses, such as hunting and gathering of firewood, herbs and pinyon nuts, but critics claim a monument will close the door on these activities.

The Tribune's survey, which asked the Bears Ears question among more than two dozen others, is the third gauging attitudes about Bears Ears conservation plans. All three produced different results.

Creative Justice Ministries, a Christian-based conservation group, released findings May 17 showing that 7 in 10 Utahns support a monument. The next day, Utah Policy released polling that concluded 17 percent want Obama to designate a monument. But another 31 percent told pollsters that Congress should establish a national conservation area as envisioned in the ongoing Public Lands Initiative — meaning 48 percent support some kind of protections, while 36 percent said Bears Ears' status should remain unchanged.

That poll also "revealed that 68 percent knew little or nothing about the proposal," Perry said, and "more public awareness and possibly how the questions were phrased may account for the tremendous shift in public sentiment on this issue."

SurveyUSA conducted the Hinckley/Tribune poll between June 2 and 8. The Bears Ears question asked: "Do you support or oppose designation of a Bears Ears National Monument in southeastern Utah?" The question was put to 1,500 likely voters with a sampling error of 2.6 percent. Conservatives and Mormon's were far more likely to oppose a monument. For example, non-Mormons favored a monument 47 to 28 percent, while Mormons opposed 49 to 21 percent; among voters who identified as "somewhat liberal," support was 66 to 14 percent.

Utah's top political leaders agree that Bears Ears should be protected because of the profound cultural importance of this region, bound by the San Juan and Colorado rivers and Abajo Mountains. The fight is over how protections should be imposed: by presidential decree or by act of Congress.

Among those deeply opposed to presidential use of the Antiquities Act is Sen. David Hinkins, R-Orangeville, whose sprawling rural district covers San Juan County.

"I wonder how they overlook their own policies. They do [environmental] studies every time anybody makes a change of the use of the land, yet they can go in there and do a million and half acres of change without following their own directions," he said Monday on KUER's RadioWest program. "It should be an act of Congress, especially for so much land. It's one-third of the county."

Utah Rep. Rob Bishop has drafted legislation that would establish a national conservation area for Bears Ears as part of his Public Lands Initiative, which would affect 18 million acres in eastern Utah. That bill has yet to be finalized after more than three years of effort aimed at forestalling the designation of a Utah monument before Obama leaves office.

Hinkins said his preference would be to forgo the Public Lands Initiative and allow the state to take over Cedar Mesa along with 30 million acres of other lands managed by the Bureau of Land Management and U.S. Forest Service.