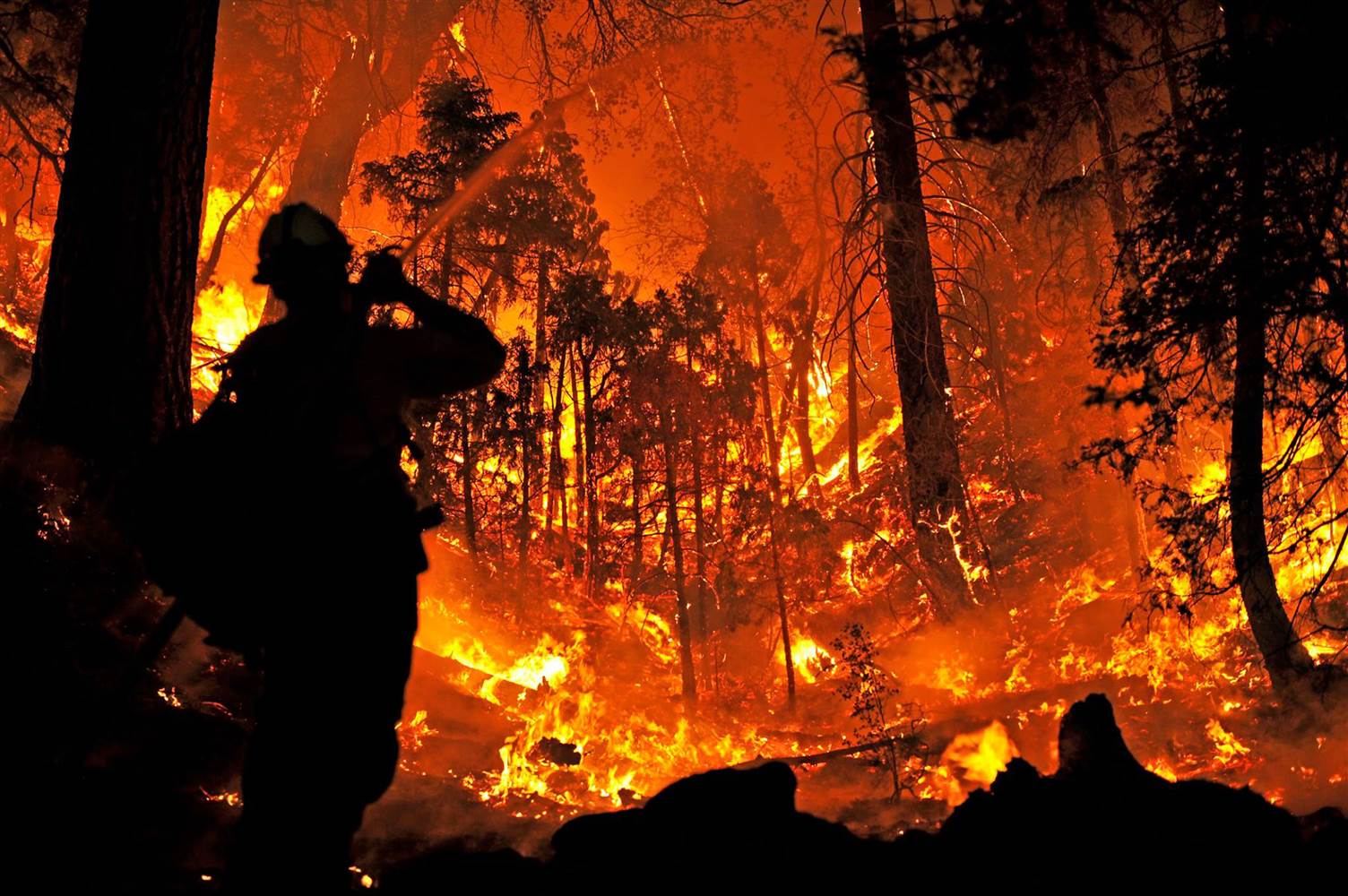 From the office of Arizona Congressman Paul Gosar

Our forests and natural resources are a way of life in Arizona.  Rural Arizona is home to over nine million acres of United States Forest Service administered land, including much of Apache-Sitgreaves, Coconino, Coronado, Kaibab, Prescott, and Tonto National Forests.

These ecosystems are suffocating under too many trees.  Where we once had 10 to 25 trees per acre, we now have hundreds.  These conditions have increased wildfire conditions. The frequency of fires, and the magnitude of the acreage burned, has exponentially increased since 1990. The five largest wildfires, Rodeo in 2002, Cave Creek in 2005, Willow in 2004, Aspen in 2003, and the recent Wallow Fire have all occurred in the last ten years.  Prior to 1990, the largest fire was the Carrizo fire in 1970 which burned just 57,000 acres.

Our forests have been mismanaged for a long time and it is way past due to change our strategy.  As your Congressman, I have been fighting for proactive, solutions oriented, and fiscally sustainable policies that restore the environment, improve public safety, and put people back to work in our forests.

It is of the utmost urgency that the federal government adopt a forward-thinking, active management strategy that combats dangerous wildfires before they get started. As a medical professional for over 25 years, I know firsthand that preventive care is a much cheaper and effective treatment as opposed to dealing with an illness or disease after it has already been diagnosed. This must be the same approach we take to forest health and wildfire prevention. Unfortunately, President Obama and his administration continue to play politics with wildfires and waste billions of dollars on the back-end on suppression.

Nearly 10 million acres burned in the 2012 wildfire season.  Failure to focus on wildfire prevention strategies that season resulted in 44 times as many acres being burned than responsibly harvested as the Forest Service only harvested approximately 200,000 acres in the entire country.

Unfortunately, the same backwards thinking of the federal government has not remedied the crisis in our forests and the 2015 fire season set a new record burning 10,125,149 acres throughout the country.  In fiscal year 2015, the fire season appropriations request was approximately $4 billion for all wildfire programs. Shamefully, the president requested only $356 million of those funds go toward hazardous fuels reduction activities.

Thinning overgrown forests and removing hazardous fuels will create jobs and increase overall forest health. Unfortunately, extremist environmentalists fail to comprehend this fact and hold up important forest health management projects that would actually help reduce greenhouse gas emissions. Sound data from NASA has concluded that one catastrophic wildfire can emit more carbon emissions in a few days than total vehicle emissions in an entire state over the course of a year.

This classic example of Washington misprioritization is extremely misguided. The Forest Service’s own Fuel Treatment Effective Database reports that “over 90 percent of the fuel treatments were effective in changing fire behavior and/or helping with control of the wildfire.”  Unfortunately, federal land management agencies have failed to recognize this correlation and timber harvests are down 80 percent over the last 30 years. Such flawed thinking also negatively impacts education and local communities as historically 25 percent of the receipts from all timber harvested by the federal government go toward schools and important infrastructure projects.

Timber Harvests Down 80% Over the Last 30 Years 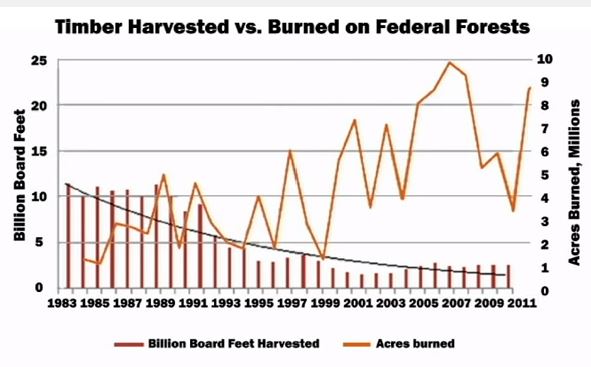 On January 4, 2016, the National Interagency Coordination Center released the official total number of fires and acres burned for 2015: "The 2015 fire season set a new record for the number of acres burned in the United States, totaling 10,125,149 acres." 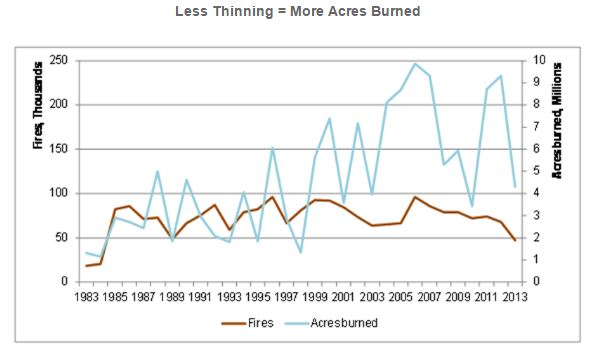 Over the last 10 years, the percentage of the Forest Service’s budget spent on fire suppression has increased from approximately 13 percent to nearly 40 percent of the entire annual budget. Significant reforms are needed to reduce these costs and empower the private sector. 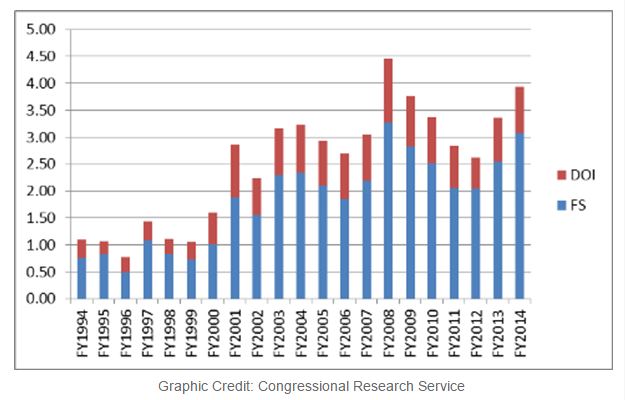