Recently Montana State Senator Jennifer Fielder, who is an active leader with the American Lands Council, toured the scene of the Copper King Fire in Northwest Montana with the United States Forest Service (USFS) and others. This is what she had to say about her firsthand look at the aftermath of the 29,000 acre burn, and efforts to make some good of the disaster:

"As we convoyed up a series of bumpy roads, every bend we rounded revealed a new glimpse into an eerie, endless sea of blackened forest. The light dusting of snow that morning created a stark visual contrast between each burnt tree and the snowy white ground.

It was sickening to see and smell so much devastation. Since that calm summer afternoon when the fire first broke out, many folks have wondered what went wrong. Who started it and why wasn’t the fire contained when it was small? Why were so many firefighters sent home just before it grew to astronomical proportions? What could have been done differently to prevent its spread?

Obviously there are a number of factors that affect wildland firefighting, and a number of theories as to what happened on this one.

In total, the Copper King Fire burned about 29,000 acres. Roughly 2/3 of that is federal land while about 1/3 is State and private. Sadly, nearly 10,000 acres of the federal area is essentially deemed untouchable due to an old federal rule that restricts motorized access and prevents timber management activities in what is classified as Inventoried Roadless Area (IRA). The crazy thing is the so-called Inventoried Roadless Area actually contains roads. That’s Washington DC logic for you.

The goal of this particular field trip was to review the Forest Service’s salvage plans and see if improvements could be made. The site visit was requested by Tri Con Timber over concerns about the small area proposed for timber recovery and the lengthy implementation schedule.

Timing is everything when it comes to managing a forest, especially recovery of dead and dying trees that will decay and become useless if not harvested in time.

With a great sense of urgency, Weyerhaeuser has already begun salvaging dead timber on their portion of the burn, and the State of Montana has completed a plan that will allow logging on impacted State owned public land in the spring.

Unfortunately, salvage logging on federal land isn’t scheduled to begin until next winter at best. The slow time table on federal lands means much of the timber will begin to check (split), twist, rot, or just tip over before it can be logged.

Only 1,700 acres, or about 9%, of the burned federal land is proposed for salvage activity. That leaves 90% unavailable for timber recovery. Some of these limitations are due to physical and economic factors, but other limitations don’t make much sense.

The problem is if all the burned trees are simply left in place, they will fall over and form a massive layer of dead wood covering thousands of acres. And when a future fire moves into millions of tons of deadfall like that, it will burn even hotter than the original fire did, causing far greater damage to the ecosystem.

On the other hand, when accessible burned areas are logged in a timely fashion a lot of the timber can be brought to market and put to good use. This reduces ground fuels and provides direct jobs and a host of beneficial economic activities for our area. Salvage logging also generates revenues for land management agencies to implement environmentally beneficial rehabilitation work throughout the burn.

As a result of the field trip, federal land managers are considering adding up to 1,400 additional acres but that would still only result in 16% of the burned federal land being salvaged. Even worse, District Ranger Dave Pettis doesn’t believe the federal time table can be hastened.

If the feds don’t step up their plans to allow logging next summer, it could be too late. Their plans should be adjusted to allow recovery of much more than 16% of the burn. To that end I have joined with foresters from throughout the region in requesting an Emergency Situation Determination (ESDS) to expedite removal of dead trees, increase the acreage treated, and allow recovery inside the Inventoried Roadless Area.

If ever there was a time for the Forest Service to shine, this would be it. We hope they can get it done, but chances are federal bureaucracy will get in the way."

With our forests and public lands being held hostage under the rule of a one-size-fits-all policy, there’s no possibility of having the individualized care each and every state’s land needs. The overly-bureaucratic system of Washington DC is causing our forests to be neglected and wasted. Hundreds of other stories similar to that of the Copper King Fire are prevalent across the West. In a ‘hands-off, don’t-touch’ museum style approach to public land management, this is what we get under federal control:

It’s time to #FreeTheLands from federal control so we can tend our public lands more like a living, breathing garden and less like a “hands-off, don’t-touch” museum. After all, who knows and cares about western lands better than westerners do?

It's time Congress #HonorThePromise of Statehood it made to all states --- that is to allow each State the equal right to govern the lands, resources, and citizens within their borders. The great imbalance of a distant, unaccountable federal bureaucracy controlling over half the land in western America isn't fair, and it isn't working.

If you want to see real corrections in how our public lands are governed, please JOIN ALC today!

CLICK IMAGE BELOW TO SEE HOW TO FREE THE LANDS FROM FEDERAL BUREAUCRACY: 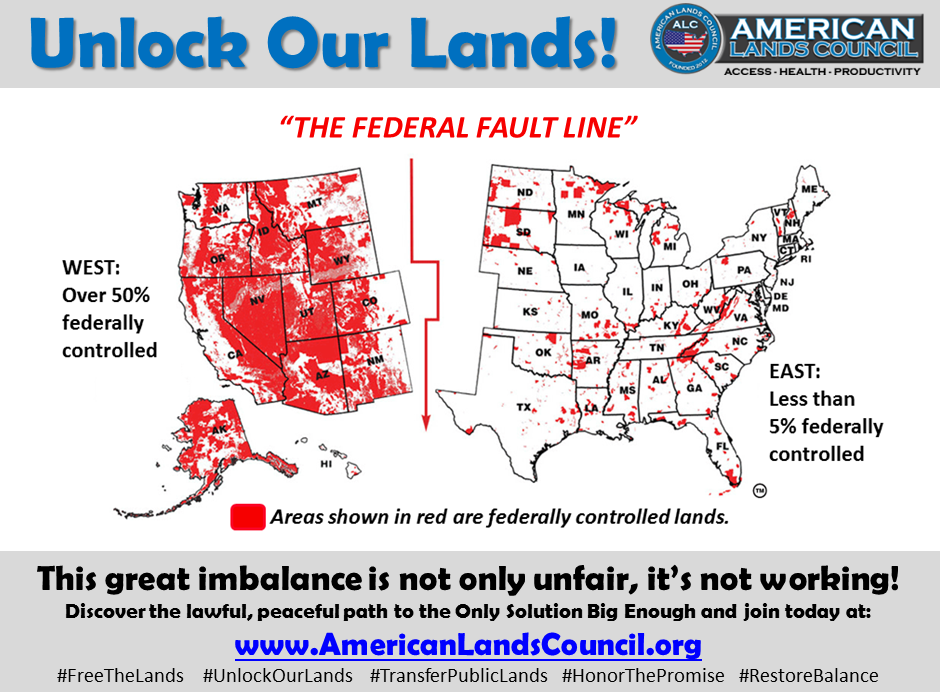