Silver Lining as Nature Removes the Overgrowth of Trees 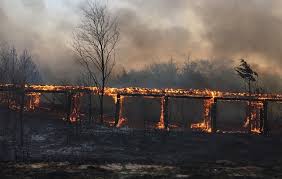 One of the most difficult problems for communities to deal with when forests become overgrown, is the lack of water caused by too many thirsty trees. This lack of water has a devastating effect on those same trees, leaving them susceptible to catastrophic wildfires that destroy the very forests we are trying to protect

The Wichita Eagle recently released an article that highlights the need to keep trees and ground vegetation under control in order to protect the public lands we all treasure, as was proven in the recent Anderson Creek fire, the largest recorded wildfire in the history of Kansas. Read the entire article HERE.

On March 22, 2016, the Anderson Creek fire consumed nearly 400,000 acres of prairie, scouring the land of almost all things living. Now after 6 months, life has returned to the Red Hills near Medicine Lodge, Kansas.

Rancher Brian Alexander stepped over a tiny stream and into waist-high grasses, bushes, brambles and wildflowers.

“Six months ago, this was mostly bare dirt under a canopy of red cedars,” Alexander said. “This spring probably hasn’t run in the last 20 years because of all the cedars taking water.”

Rising from this small valley and neighboring prairie were the charred skeletons of cedars that would never sap water or growing space from the Red Hills again.

Alexander’s 7,000 acres were part of the estimated 390,000 acres burned in late March by the Anderson Creek Fire, which started in Oklahoma before moving north into Kansas. The horrific blaze was named for its ignition spot in Oklahoma.

It is the biggest wildfire in Kansas history.

The fire led to the deaths of hundreds of cattle, damaged or destroyed millions of dollars’ worth of fencing and torched several homes and other possessions.

But now ranchers are finding a silver lining in the massive fire.

“It’s kind of the best of times coming out of the worst of times,” said Mark Huddler, a rancher who lost 27 miles of fence and several buildings. “We’ve got water in streams that haven’t run for years because the fire decimated so many cedars.”

An Oklahoma State University study says a 12-inch cedar tree can use up to 42 gallons of water per day. Many thousands of cedars died in the fire.

“What’s been the worst fire is going to become the second-worst fire if we don’t pay attention to this,” said Ted Alexander, Brian’s father. “This will happen again.”

Controlled burning, proponents argue, is the only way to rid the prairie of cedar trees and other fuel and prevent another major wildfire.

“Prairie needs fire almost as much as it needs water if it’s going to stay healthy,” Ted Alexander said.

As long as there has been lightning and grass, fire has been part of the Red Hills, a geographic region known for buttes, rugged canyons and great grazing about 90 miles southwest of Wichita.

Early people like the Comanche once burned the prairie so their horses could feed on the regrowth of tender grass.

But along with settlers came the fear of fire. Farmers and most ranchers did their best to quickly extinguish all blazes. That has become easier with the advent of better firefighting equipment, instant communications and access through maintained roads.

But the best gear was largely ineffective on the Anderson Creek blaze. Rick Wesley, Barber County rural fire chief, said he couldn’t have designed better conditions for such a blaze.

[Many] said it was the proliferation of cedar trees that repeatedly turned the battle in favor of the fire. Even live cedar trees are combustible and literally explode, sending embers into the air.

“We’d have had a chance if it wasn’t for the trees,” Brian Alexander said, “but with them, we had the fire jumping a quarter- to a half-mile at a time.”

Wesley said at least 11 structures were destroyed, including four houses. Matt Teagarden of the Kansas Livestock Association said his group conservatively estimates 1,000 miles of fencing was destroyed or damaged. At an average of $10,000 per mile, fencing costs alone could total $10 million for the region.

It would only be fair, Brian Alexander said, if ranchers got some financial assistance removing cedars from the Red Hills. Hiring specialized machinery can run more than $100 per hour.

“We’re talking about cedar trees, but what we’re really dealing with is water,” he said. “That’s the most valuable natural resource on the planet.

“This could be our chance to make a difference.”

We're grateful that there was no loss of human life in this devastating fire and hope that we can urge citizens and government to work together to protect our lands and the precious natural resources that thrive there.