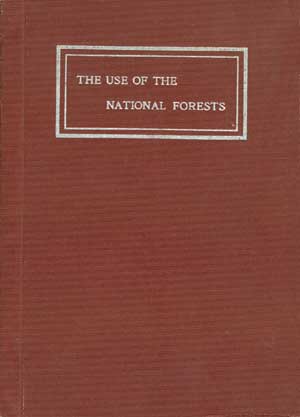 Gifford Pinchot, considered the "Father of the National Forests," drafted this pamphlet in 1907 as the promise to the American people that the creation of national forests would increase access, health and productivity in the wooded lands of the west. One of Pinchot's primary arguments for a system of national forests was because otherwise "the timber was simply locked up and left to burn."

Whether specifically intended or not, the practical "bait-and-switch" now seems to have come full circle.  Forests that were put under federal protection with the assurance that doing so would "save the timber for the use of the people, and ... hold the mountain forests as great sponges to give out steady flows of water for use in the fertile valleys below" have become once again under increasing federal control time bombs where "the timber supply [is] simply locked up and left to burn."

Presently, failed federal forest policies are resulting in record setting catastrophic wildfires that are sending more than six million acres a year up in smoke, killing millions of animals, destroying wildlife habitat, and decimating watersheds and fisheries for decades.  Maybe its time for a serious national discussion about turning over management of our vital forests, watersheds and habitat to local control by those whose lives and livelihoods depend upon the wise stewardship of these lands before there are no forested lands left for the feds to lock up and burn.

In 2013, the US House of Representatives Committee on Natural Resources held hearings on the state of our national forests last week.  The chart below was presented as part of the testimony, and it pretty much speaks for itself. 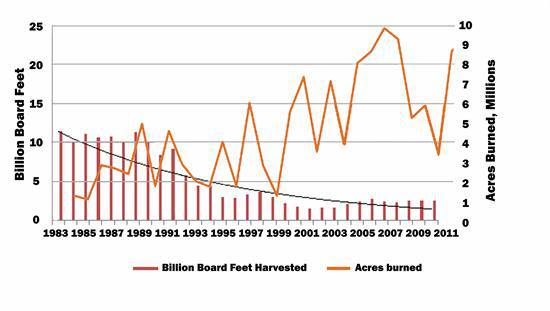 According to the testimony, wildfires burned 9.3 million acres in 2012, and much of our national forests “are in an unhealthy and dangerous state resulting in larger and more intense wildfires.”  Poor forestry management has proven to be a major contributing factor.  More background on the hearings can be found by visiting the US House of Representatives Committee on Natural Resources website.  Click here.  Given the catastrophic state of western forests under federal management and control, this is clearly a failed promise to the nation that requires serious reconsideration.

The following is the introduction to Gifford Pinchot's initial promise to the nation regarding benefits to the American people from the creation of the national forests in the official 1907 publication The Use of the National Forests:

"Many people do not know what National Forests are. Others may have heard much about them, but have no idea of their true purpose and use. A little misunderstanding may cause a great deal of dissatisfaction. The National Forests very closely concern all the people of the West and, indeed, of the whole country. They affect, directly or indirectly, many great business interests. It is the object of this publication to explain just what they mean, what they are for, and how to use them."

WHY NATIONAL FORESTS WERE FIRST MADE.

Congress took this action because the forests of the great mountain ranges in the West were being destroyed very rapidly by fire and reckless cutting. It was realized that unless something were done to protect them, the timber resources of the country and the many industries dependent upon the forest would be badly crippled. So the law aimed to save the timber for the use of the people, and to hold the mountain forests as great sponges to give out steady flows of water for use in the fertile valleys below.

At the start there was much opposition to the Forests. Often this opposition was just; for although Congress had set apart the lands and their resources it had made no provision for their use or their protection. The timber was simply locked up and left to burn. This mistake was remedied in 1897, when a law was passed which made it possible to use all the resources and give them suitable protection."

You can read the full pamphlet The Use of the National Forests by clicking here.

If you would like to add you voice to the movement to secure better access, better health AND better productivity of our forested lands through their transfer to local control Sign & Share the Petition by clicking here.