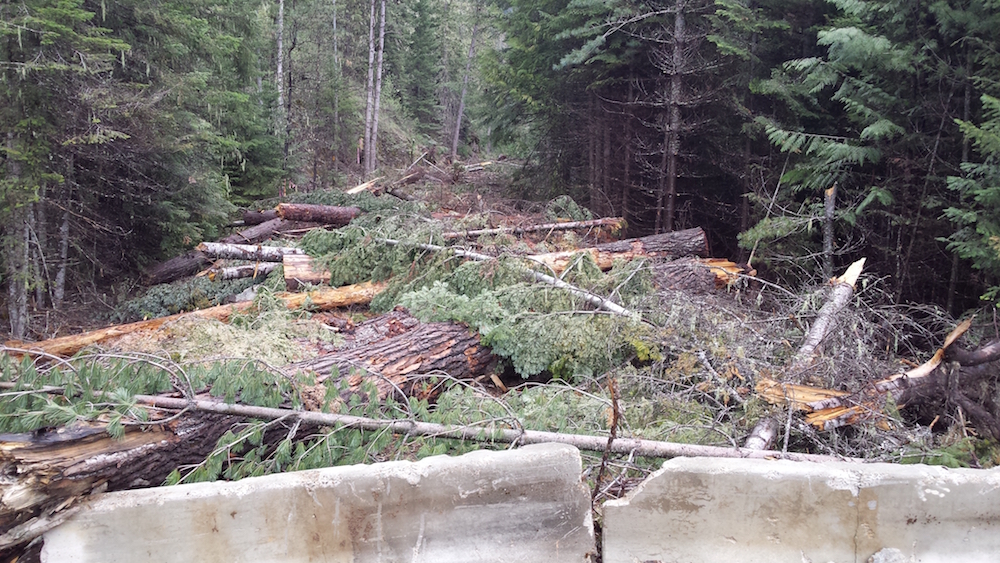 On June 10, Shari Dovale of Redoubt News, posted an article which included photographs of shocking damage done by the U.S. Forest Service (USFS) to a forest road and trails in Northwestern Idaho. Dovale confirmed the report, as did the spokesman for the group which took photographs of the damage, the Northwestern Gold Prospectors Association. The details of the story are mind boggling.

During the first weekend in June, several members of Northwestern Gold Prospectors Association (NWGPA), planned to attend a gathering to prospect some private claims in the Bedrock Gulch and Eagle Creek areas. When the prospectors arrived, Forest Road (FR) 152, which has been used both for foot and motorized traffic, had been blocked with cement barricades and hundreds of felled trees. The photographs show large logs laid crosswise and laterally on the trail, covered with hundreds of large pine branches and sticks, making it both dangerous and impassable. The section of the road along Eagle Creek was also blocked with large logs spanning its entire width, along with sticks, branches and debris, some of which appears to be spilling into the creek. 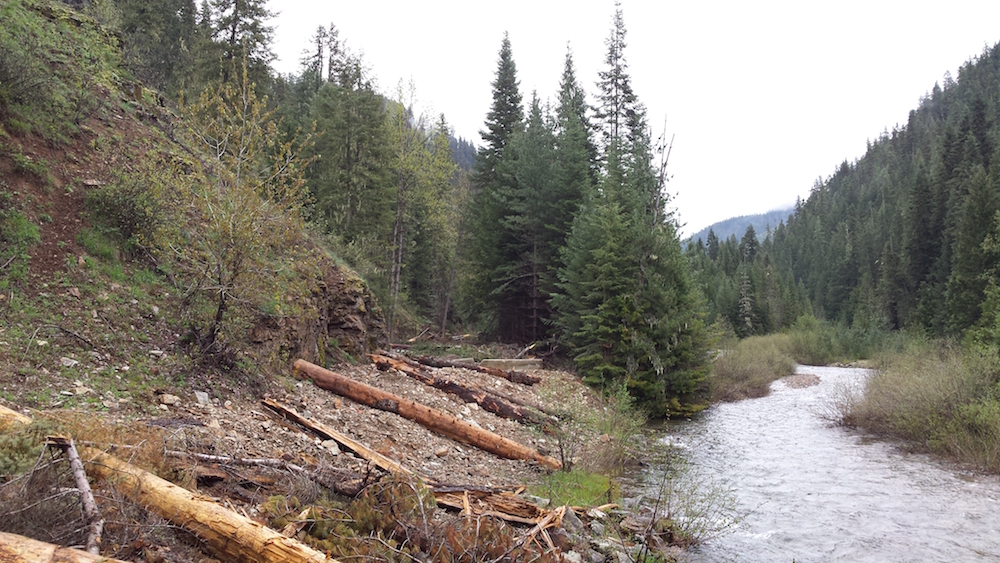 Bob Lowe, founder and past president of NWGPA, provided background on the U.S. Forest Service actions. According to Lowe, the USFS barricaded the road, which they considered to be a firebreak, because they lacked the funds to repair damage on the road which had occurred due to flooding and erosion. Lowe said, “The road had a couple of small washouts, but was still usable for hikers and people on ATVs. The road was regularly accessed by hunters and ATV clubs who used it for the multiple uses it was meant for.” Mr. Lowe also explained that the USFS blamed the prospectors for “unauthorized” repairs which some ATV clubs had previously made on sections of the road.

The NWGPA has used the roads in question in order to access privately-held claims. Many of the prospectors have simply walked the trails which, according to Bob Lowe, were “level and shaded, and easy to hike for our elderly members.” Abiding by a set of strict rules of conduct, members of the NWGPA have been committed to following proper procedures and abiding by Forest Service rules, as well as respecting the rights of others who use the forest roads. Lowe detailed the history and natural features of the now barricaded road. “The claims in that area have been mined for over 150 years and the trails up there lead to multiple use lands. At the top of the ridge is a game trail that we follow. That has been obliterated.” 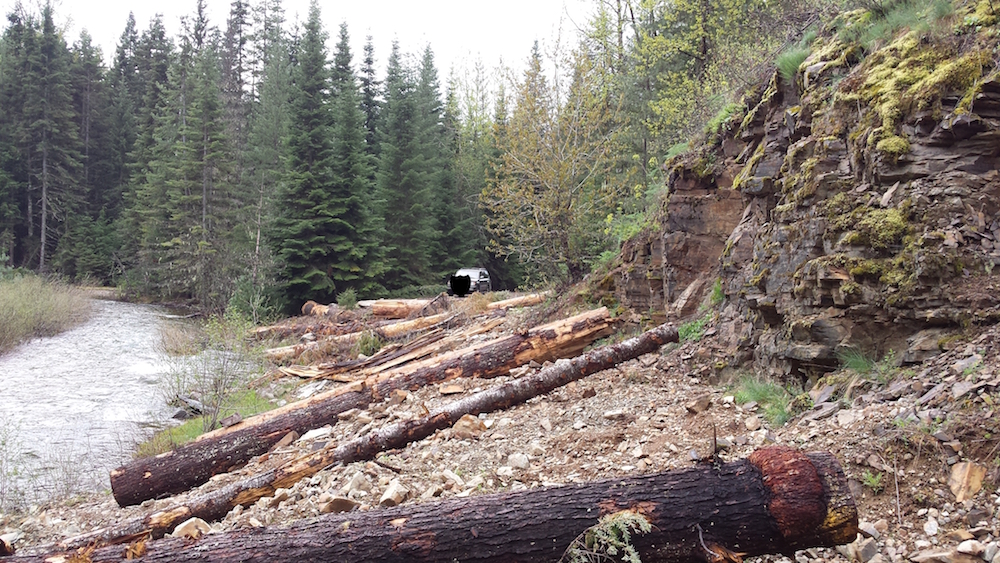 In digging for answers as to why the barricades were created, Lowe discovered that federal definitions and “procedures” are being used to justify the extreme damage done to the trails by USFS.

The office of Raul Labrador, the U.S. Congressman (R) Idaho, who represents their district, assisted the NWGPA in getting through to the USFS. Kevin Knesek, the Minerals, Geology and Abandoned Mine Lands Program Manager for the USFS Idaho Panhandle division, responded with an email explaining the agency’s rationale for barricading the roads. Despite generally unimpeded access in the past, USFS in the email claims that a “Notice of Intent” (NOI) is now ‘encouraged’ to gain legal access to FR 152. The email states:

The East Fork Eagle Creek area is a popular location for recreational mining/prospecting, and we administer numerous requests each year for utilization of closed Forest Service roads to access claims.  Access on closed routes is encouraged to be requested via a Notice of Intent to mine (NOI), which provides the Forest Service a consistent request mechanism, and the claim holder non-discretionary consideration of his/her request.

The email also cites road repairs, for which USFS blames the miners:

In fact, there was even evidence in the Spring [sic] of last year that people were attempting to reconstruct the road in some areas.  This reconstruction was not authorized, as there was no approved Plan of Operations and associated NEPA to authorize it.

But it appears that the designation of the road as a “firebreak” is being used as the key justification for the extensive damage caused by the barricades and downed trees. USFS regards “fire management” features to be temporary, thus, requiring them be “reclaimed” after they have served their purpose.

Last summer, due to fire activity in the Eagle Creek area, the Forest Service bulldozed a fire line along what was the lower stretch of Forest Road 152, and widened a non-authorized user-created trail in the area of Bedrock Gulch, which feeds into East Fork Eagle Creek.  The Forest Service is obligated to reclaim disturbances associated with fire management, and as a result course woody debris (large logs) were placed over the areas bulldozed and/or widened.  Additionally, where possible, the fire line surface was scarified and brought back to a state which would give it a chance to weather more naturally.

NWGPA spokesman, Bob Lowe explained that, historically, the prospectors and the Forest Service had enjoyed a cooperative relationship, but that in recent years it had become less cordial and unpredictable. Baffled and frustrated by the actions of USFS, Lowe explained, “There are a number of people in our local USFS office who I like and respect, but in the last seven years the agency has hired a bunch of interns just to come out and take videos and pictures of our activities. We would see them standing around with their cameras and clipboards, and we started getting complaints of ‘significant surface damage’ being caused by relatively small prospecting efforts. We got complaints about tiny holes left in the ground where someone with a metal detector would dig up a bottle cap. One report was for cutting a few lower branches of a small tree.”

Considering the extremely high standards of care the USFS expects from citizens who enter national forests and use roads and trails for recreation, hunting, and other multiuses, it appears that its own standard for environmental stewardship is abysmal. The photographs provided by members of NWGPA reveal extreme levels of environmental disruption and damage to vegetation, and potential devastation to Eagle Creek. A historic game trail, used by elk, deer and other large mammals, is now a maze of logs and branches dangerous to all but the very smallest animals that inhabit the area. It leaves one perplexed and wondering why the USFS didn’t apply the money, time and manpower used to create environmentally destructive barriers to FR 152, to the road’s repair and maintenance?

Shari Dovale, in her article in Redoubt News, cited Environmental Protection Agency (EPA) Clean Water rules, which were almost certainly broken by the USFS in its placement of logs and debris along the edge of Eagle Creek, which appears to be subject to undercutting due to seasonal high water. Dovale summarizes this apparent double standard on the parts of federal agencies with, “…as you can see from the pictures, the Forest Service has intentionally plundered the area next to Eagle Creek, which leads to the Coeur d’Alene River. How is it that they are allowed to get away with this? Will the EPA even blink when it comes to the government’s intentional violations?”