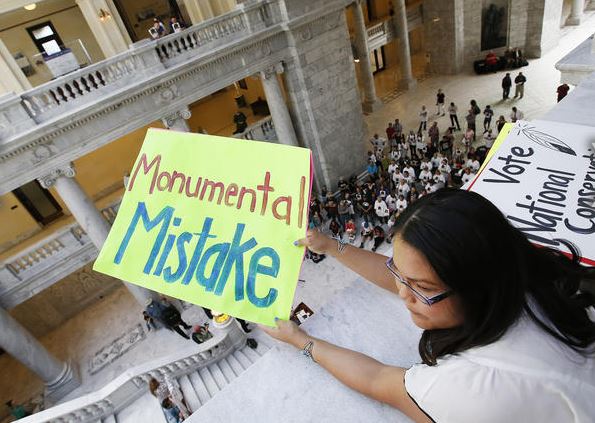 SALT LAKE CITY — The Utah Legislature told the Obama administration Wednesday in a strongly worded resolution that the state doesn't want a new national monument and is gearing up to fight any attempt to create one.

The 184-line resolution challenges the president's authority to create a monument under the Antiquities Act and calls on the Utah attorney general to pursue all legal options available to the state regarding "improper" unilateral national monument designations.

The document typifies the ongoing issue Utah's Republican-controlled Legislature has with what it considers federal overreach and comes as Obama considers designating the 1.9 million-acre monument in San Juan County before he leaves office next January.

Gov. Gary Herbert called the special session to deal with education funding issues and added the resolution to the agenda. His spokesman, Jon Cox, said the governor appreciates the support of Utahns and the Legislature.

"The message sent today to the White House is clear: Utahns do not want a new national monument," Cox said.

House members passed the resolution first, 64-10, after spending more than an hour debating changes to the bill, including a failed attempt to label the president's authority to designate a national monument under the Antiquities Act as "alleged."

"This is a huge, major and signficant impact on our state. We desire to protect, to preserve, to maintain health and access and productivity to our lands," the sponsor of HCR201, Rep. Keven Stratton, R-Orem, said in urging support for the resolution.

The Senate passed the resolution 22-5 along party lines after a much shorter debate than the House.

"This is a nasty thing to do, to stick it in the president's face like that," Sen. Jim Dabakis, D-Salt Lake City, said afterward.

Dabakis suggested the resolution could backfire on Republican lawmakers. He urged the Senate to vote it down and open a dialog with the White House.

Sen. David Hinkins, R-Orangville, called it an "invitation" to the president and Interior Department to talk about the issue. Utahns, he said, don't want another national monument and that it would be "un-American" for the Legislature to not "speak our piece."

Hinkins said the state would do "whatever it takes to oppose" Bears Ears becoming a national monument.

Most of the time devoted to the bill in the House was focused on inserting tougher language into the already lengthy resolution, including spelling out that the state must "pursue all legal options" to stop the designation.

That amendment, from Rep. LaVar Christensen, R-Draper, initially added the word "alleged" in a sentence calling for the attorney general to oppose the president's authority.

The House then went along with a request from House Majority Leader Jim Dunnigan, R-Taylorsville, to remove the word, but not before some strong objections from Republicans who wanted to make their frustrations clear.