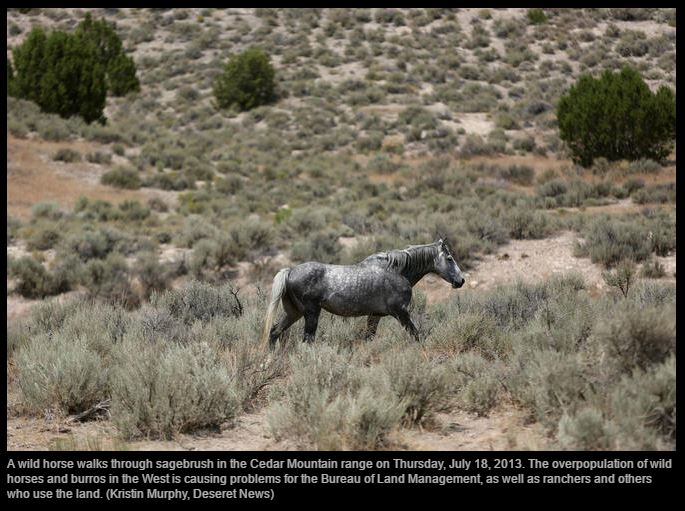 as published by the Deseret News

SALT LAKE CITY — A frustrated Beaver County commissioner complained to a top U.S. Department of Interior official that the agency is like a gelded horse and "impotent" to solve the wild horse problem in the West.

Jim Lyons, deputy assistant secretary under Interior Secretary Sally Jewell, was in town last week to talk sage grouse management. But he received an earful about the wild horse population problem in Utah.

"This is the worst managed horse population, but you guys always seem to pick on grazers," complained Beaver County Commissioner Mark Whitney in a Friday exchange with Lyons. "It has to come down from Congress. Congress has to step it up. … You guys are like a gelded horse. You're impotent. They do not give you the skills to manage this problem."

Lyons did not disagree on the agency's challenges.

"We recognize the problem with the wild horses," he said. "We don't have the resources."

"Obviously we will set to work up a briefing," he said. "The wild horse and burro problem is a significant issue when it comes to sage grouse. My worry also is that the (overpopulation) results in poor rangeland conditions, and in some ways that is inhumane. We simply don't have the capacity."

Whitney said he's been to Washington, D.C., twice and is meeting Tuesday with Neal Kornze, the Bureau of Land Management's national director, to again plead for action on Utah's wild horse population problem.

The BLM said the animals' population grew by 18 percent from 2014 to 2015, with authorities struggling to find ways to stem the growing numbers. A 2013 report by the National Academy of Sciences concluded that there were no highly effective, easily delivered and affordable fertility control methods available, and more science needs to be applied to arrive at a solution.

Whitney and rural county leaders from Utah say they've gotten nowhere in their meetings with Kornze, and Barry McLerran, a staffer with the office of Rep. Mia Love, R-Utah, told Lyons a November letter to Kornze from several Western senators and members of Congress has gone unanswered.

The letter seeks a variety of answers from Kornze, including options on how to curb population trends in wild horse management areas and how much it would cost.

"We believe that it is clear that the current management strategy of wild horses and burros has proven ineffective," the letter dated Nov. 4 reads. "Wildfire, drought and invasive species exacerbate poor range conditions caused by overstocked (management) areas."

Beaver County, Iron County and a coalition of private land owners that include ranchers filed suit against the agency over the wild horse populations, and the Utah School and Institutional Trust Lands Administration also sued the federal government alleging the wild horses were causing damage to more than a half million acres of trust lands within the state.

That suit has since been withdrawn in light of an agreement reached between the trust lands administration and the BLM to prioritize wild horse removal in the south-central portions of Utah. The agreement is subject to congressional funding.

Across the West, the number of wild horses and burros that have been adopted over the past three years has remained stagnant, putting pressure on the agency to find places for these animals to go. The agency keeps nearly 47,000 of the animals in holding pens at a cost of $49 million a year. Capacity is 57,819 animals.

Utah's first private holding facility opened in 2015, caring for several hundred starving and dehydrated horses from a management area in Nevada challenged by drought. The Sanpete ranch has capacity for 1,000 horses, and the BLM in Utah also received a proposal to allow an off-range pasture in the Fountain Green area that can hold about 700 horses.

The agency is also proposing to do a roundup and carry out a wide-scale research effort involving wild horses in the Conger and Frisco herd management areas in Beaver and Millard counties. The project is part of 21 throughout the West being funded at a cost of $11 million. Researchers from the U.S. Geological Survey's Fort Collins Science Center, as well Colorado State University, will look at gelding stallions as a potential option, fertility rates and other herd dynamics.