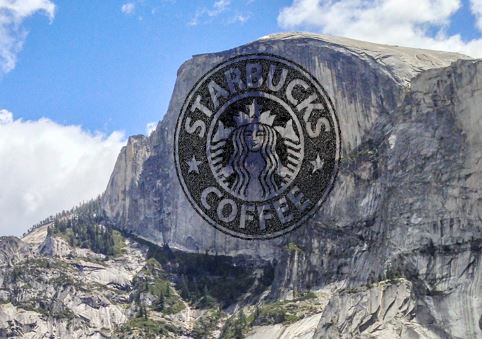 A Coca-Cola Visitor Center will still be off-limits, but an auditorium at Yosemite National Park named after Coke will now be permitted. Naming rights to roads are not up for grabs, but visitors could tour Bryce Canyon in a bus wrapped in the Michelin Man.

And park-goers could sit on a bench named for Humana health insurance — and store their food in a bear-proof locker emblazoned with the Nike swoosh.

The national park system, created a century ago to preserve the country’s natural treasures for the public, has long been a bulwark against commercialization.

But as it jockeys for donors in a more competitive environment than ever, the National Park Service is starting to tread a delicate path: Making aggressive corporate appeals without giving the impression that it’s selling public spaces to the highest bidder.

Parks have long relied on philanthropy to pay for improvements, interpretive programs, trail renovations and other projects left uncovered by their operating or capital budgets. Donors got unobtrusive recognition in return — maybe a small plaque near a trail thanking them for their generosity.

But now Director Jonathan Jarvis wants to swing open the gates of the 411 national parks, monuments and conservation areas to an unprecedented level of corporate donations, broadening who can raise money, for what and what the government will give corporate America in return.

“The great thing about the policy is it protects those features of the park that are important to all of us,” said Jeff Reinbold, the park service’s associate director for partnerships and civic engagement, “but it gives us new opportunities and new tools” to respond to donors who perceive the government as too slow to get deals done.

Jarvis proposed the expanded rules for philanthropy in March in a 33-page order that’s set to take effect by the end of the year.

The park service still won’t recognize donors with advertising or marketing slogans. But for the first time, their logos will get prominent display. Companies will be able to earmark gifts for recurring park expenses, which was prohibited before. And a company in litigation with the Interior Department, the park service’s parent agency, could now donate as long as the dispute does not involve a national park.

Bricks or paving stones on the steps to a visitor center, video screens inside, educational, interpretive, research, recreation and youth programs, positions or endowments — these also  will get naming rights, according to the proposed policy. There could be walls in visitor centers dedicated to donors, or digital ones, as fundraising is beefed up through crowd-sourcing and other on-line strategies to reach the public.

And a donor will now be allowed to design and build a park building and even operate it long term.

Park officials say the shift, tested during this year’s centennial celebration, was prompted by an $11 billion backlog in maintenance projects, more or less flat funding from Congress and a need to attract young and diverse visitors that the right corporate partnerships can encourage.

“It’s about about aligning [the parks and private companies] with the values of authenticity” the park service represents, Reinbold said. “The American narrative.”

But the new brand of philanthropy is drawing fierce criticism from watchdogs and park advocates, who accuse Jarvis of embracing a creeping commercialization they say has no place in the park system.

“You could use Old Faithful to pitch Viagra,” said Jeff Ruch, executive director of Public Employees for Environmental Responsibility (PEER), a watchdog group that’s trying to rally the park community to fight the plan. “Or the Lincoln Memorial to plug hemorrhoid cream. Or Victoria’s Secret to plug the Statue of Liberty,”

“Every developed area in a park could become a venue for product placement,” Ruch said. Or access: “A telecom company could say, ‘Nice mountain, we’ll make a generous donations for the right of way.'”

Critics worry that corporations will now see openings to demand privileges or influence park policy the way Coca-Cola, already a major donor, did in 2011. After Jarvis started encouraging parks in 2011 to ban the sale of bottled water to save on recycling expenses, Coca-Cola, which owns Dasani Water, balked — and Jarvis stalled the ban at the Grand Canyon. It eventually went into effect.

Congress also has relaxed the rules on what can be displayed in national parks, adding language to last year’s defense bill that encourages the park service to amp up private fundraising with more donor recognition, including naming rights to park facilities.

“Our needs are astronomic,” said Will Shafroth, executive director of the National Park Foundation, the park service’s fundraising arm. “The parks don’t have enough money to accomplish their goals.”

This is particularly true at smaller parks that often get less attention from donors, even with fundraising by active “friends” groups, he said. So to increase giving, park superintendents are being asked to play new roles as fundraisers, among the biggest and most controversial changes in the new policy.

Superintendents could “accept” gifts of $100,000 or up to $5 million with certification, training and other conditions, the policy states. They won’t be able to solicit money directly — that’s prohibited for federal employees.

But “we want superintendents to get more engaged” in the fundraising process, Reinbold said, being in the room when outside fundraising groups meet with prospective donors, for example, and acting as experts.

The park service is commemorating its 100th year with a $350 million fundraising campaign that for the first time allowed large banners in the parks featuring donors’ corporate logos.

Last year Jarvis lifted the policy against taking money or advertising support from companies that make alcohol, signing a $2.5 million marketing deal with beer-maker Anheuser-Busch it hoped would help draw draw millenials to the parks.

Budweiser kicked off the partnership with a summer music program in the parks, packaged beer bottles in an image of the Statue of Liberty and issued a press release citing the brand’s pledge “to safeguard these breathtaking landscapes and places of cultural and historical importance, and inspire generations of national parks enthusiasts.”

But the beer maker stumbled the same week when the phrase

“The Perfect Beer For Removing ‘No’ From Your Vocabulary For The Night,” printed at the bottom of Bud Light labels, was widely panned as encouraging sexual assault. The company backed off of the slogan, and while it did not appear inside the parks, critics questioned the park service’s association with the company.

At Yellowstone National Park, one of the crown jewels of the system, companies from Toyota to energy corporation ConocoPhillips have paid for crucial needs in recent years the park could not have afforded, Superintendent Dan Wenk said.

“Corporate stewardship in Yellowstone has supported the restoration of native fisheries, reconstructed trails and overlooks, wildlife health and the reintroduction of wolves, and provided both funding and expertise to build sustainable facilities in the park,” Wenk said.

He said he feels comfortable with an expanded role for park superintendents in fundraising, which he contends does not cross the line into direct solicitation: “I’m not the one who does the ask.”

But park advocates worry that the new role for park managers alters their fundamental duties as caretakers of the park system.

“The policy says park superintendents must perform a number of fundraising duties,” said John Garder, budget and appropriations director for the National Parks Conservation Association, the nonprofit advocacy group that lobbies for the parks.

“Does that become a major part of the job?” Garder asked. “Can the park service say, ‘This person’s doing an awesome job protecting bison, but they’re not raising enough money?’“