Our federal landlord has done Colorado no favors 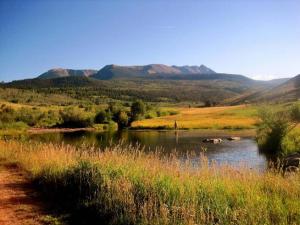 If what Thomas Jefferson said is true, "that a little rebellion now and then is a good thing," the latest wave of sagebrush rebellion sweeping the West, which has some states exploring the possibility of defederalizing public lands, could be a very good thing if it forces Washington to embrace Westerners as true partners, rather than the vassals we're treated like now.

It's a debate Colorado's coming to late, but a debate we should have, given the vital role these lands play in our economy, our national "brand" and our Western way of life. The topic didn't create huge buzz through this election cycle, but it did get passing mention from some candidates, which was enough to rouse a backlash from those who either misunderstand or misrepresent the issue.

It's been slammed by opponents as a land "sell-off" or "giveaway," but what's really being sought is a potential power shift, from federal to state control. At issue is whether "federal lands" in Western states could be better administered by people living here, who have a more direct stake in their status, rather than the distant, unaccountable, often-inept Washingtonians "managing" them now. And the stakes are high for Colorado, given that 36 percent of the state's landmass, totaling more than 24 million acres, is controlled by Uncle Sam.

The dangerously degraded state of these "protected" lands couldn't be more obvious. Browned or blackened forests; unchecked beetle blight; raging wildfires: lives lost and homes razed: all are a direct result of Washington's inability (or unwillingness) to responsible manage its holdings. And those are just the most obvious costs of bureaucratic malpractice.

Federal failure to field an adequate air tanker fleet forced Colorado to fund its own. We've seen energy and other resource-related jobs foregone because of access restrictions on lands that are supposed to be managed for multiple uses. We've seen roads closed and recreational access restricted. And we've seen the "public process" hijacked by organized green extremists, who consistently work to overturn multiple-use management.

Is it any wonder, give all this, that some Western states are reaching the point of open rebellion? Not just our economies, but our safety, natural bounty and quality of life are all at risk when mismanagement of this magnitude occurs. Calls for more state control aren't at this point an academic exercise, or an act of selfishness. They're matters of self-preservation, self-respect and self-determination.

The potential costs of assuming control often are cited as an obstacle. But how much higher could those be than the costs Colorado already has borne under the federal regime? Under state control, it's more likely that these acres will be managed for multiple-uses again, which the feds promise but no longer deliver. We'll see the return of carefully-regulated mining, energy and timber jobs. The idea that these job-generating activities are incompatible with environmental protection is just a myth. The economic gains and revenue boosts resulting from a more balanced approach could more than cover the costs of administering these lands, and might become the engine of a stronger Colorado economy.

Are states incapable of responsibly managing these lands? There's no evidence to support that. Most states have strong stewardship traditions and records. The only interests seeing an advantage in continued federal control are organized environmentalists, whose lobbying job becomes much easier when all decision-making is done in D.C. These groups understand this concept's appeal to average Westerners. That's why they're mobilizing so aggressively against it.

It's romantic and antiquated thinking to assume all acreage under federal control is "preserved" or "protected." Ample in-our-face evidence proves otherwise. And "Washington knows best" is a mantra that's lost its magic. Washington's just too bloated, bumbling and beholden to special interests to competently do this job. And states arguably have an obligation to fill that void when the level of dysfunction puts lives, property, jobs and our Western way of life at risk.

Sean Paige from Colorado Springs has been a long-time writer on federal land issues.

This article was originally published in Burlington Editorials.