If the US Constitution could talk it would begin with a simple concept. It would tell you that government, not you, shall do what I say it shall do and nothing else. If I don’t say it can do something it wants to do, it cannot do it. 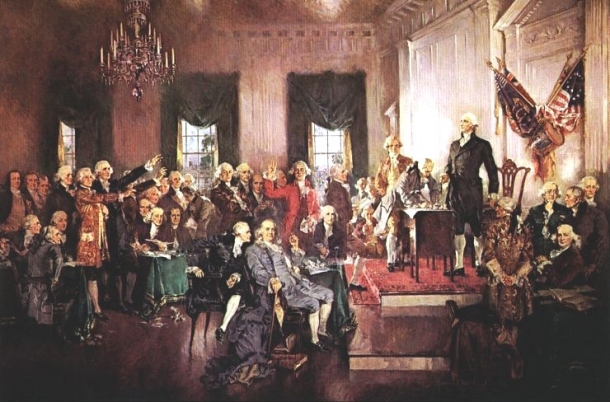 The Constitution would continue and tell you to read it. But it wouldn’t tell you to start at the beginning, that’s where a lot of people get mixed up. It would say turn the page and start at Article VI (6 in simple English), clause number two.

So we should read it. When we do we find the words rather simple and to the point, but the Constitution won’t allow you to get beyond the first phrase when it tells you to “Stop right there!”

So we wonder what the Constitution says about our national forests, parks, preserves and the other land claims in the west. If we ask, the Constitution would tell us there is simply three, perhaps four places in the US Constitution where federal land claims are allowed. They are in Article 1, Section 8; Article II, Section 2; Article IV, Section 3; Article VI, Clause 1. How many of you knew that? So, lets’ look at each one.

The Constitution would tell you to view Article 1, Section 8, Clause 17. It allows cession by state(s) of ten miles square, purchases from the States for forts, magazines, arsenals, dock yards, and other needful buildings. This doesn’t say a national forest, a preserve, for BLM does it. So what was that first fundamental principle the Constitution told us about above? Is it a can or a can’t have a national parks on this authority. So, let’s go on.

The Constitution tells here in Article II, Section 2, Clause 2 that the president can make treaties with 2/3s of the Senators. What they don’t tell you anymore is the Senators were representatives of the state legislature. While under the pursuance clause above it would take 2/3s of the state legislatures consent for the president to make a treaty because today the Senate does not represent the legislatures. Hmmm, at this point we should ask if the 17th Amendment didn’t violate the pursuance clause, but that’s beside the point. More to the point in this discussion we should ask the Constitution if a treaty can be one to buy land. I think we’ll get to that in a bit.

The Constitution tells us in Article IV the Congress shall have authority to dispose of land respecting the territory, or other property belonging to it. The Constitution will tell you, if you listen at this point, it does not say it can purchase or gather granted land to itself. Did it? No but it may have presupposed it could have authority to hold territory if only to dispose of it. Gets kind of interesting doesn’t it. But that’s not all, the Constitution told you from above that there were four places it made provision for the federal government to receive land.

Before we get into the fourth place I should mention this. Most people will say that I’m all wet. Well on a hot summer day I might wish to be cooled off in a swimming pool. But I’m not all wet even when the skeptical calls me out on the Northwest Territory. But no, that won’t hold up for the skeptics. There was not Northwest Territory until King James released his claim on it. He didn’t release it to the United States. He released his claim to twelve named individual States in 1783. The Confederation was a mere six years old and England still had a claim on it until 1783. So, how did the United States obtain authority to gather in a territory if the first three references didn’t do the trick to make in in pursuance thereto in the US Constitution. The answer is actually very simple.

Cession of western lands to the United States went on beginning with New York for Ohio in 1781 until Virginia’s cession for West Virginia in 1863. And in between these dates, the US Constitution was made effective in 1789. The new States began admissions after the US Constitution using the plan created earlier by the Confederation. The first new State was Vermont in 1791 and Ohio wasn’t admitted as the fourth new state until 1803.

The 1780 guarantee made both the states and the Congress obligated to perform as planned. That guarantee is The 1780 Land Ordinance on Western Lands. It was the original states cessions of great value that engaged both congress and the States to that guarantee.

But as the next few years passed until the US Constitution became effective, two other Ordinances were created to be part of the new state admission plan. First was the Survey Land Ordinance of 1785, and second was the Northwest Ordinance of 1787. All three of them are in pursuance of the Constitution because of article VI, Clause 1. So all states should be equal in all respects toward the US Constitution, but they are not. It’s because the Pursuance Clause was rejected by those in DC and the people trusted their government to act always in pursuance thereof.

Another Act of Congress became Compact as well because it was demanded to make the US Constitution acceptable to all the States, and was in pursuance of the Constitution. It was the Act of Congress offering a Bill of Rights in accordance with “in pursuance thereof.” So was the plan to add new States that became Compact law in the Confederation and made effective in the US Congress, “in pursuance thereof” as well. They were the 1780 Land Resolution guarantee binding both state and congress, the 1785 Land Survey Ordinance and the Northwest Ordinance

So, there you go folks, simple isn’t it? But don’t you believe that corrections should be made? If the Constitution were able to observe what government has become, it would have but a simple, quiet voice to share. “Better stand up people, bad things are at the door if you don’t”