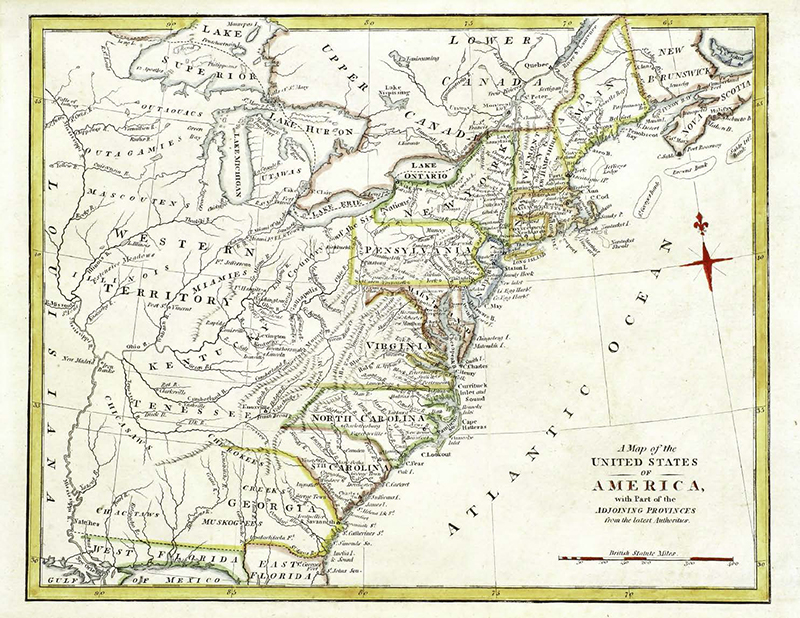 Nearly 250 years ago, thirteen English colonies in North America declared their independence from the Crown. In doing so, they created thirteen nation-states; sovereign, free and independent not only of Britain but of each other. As nation-states, they had exclusive jurisdiction over the people and territory within their geographical limits. No law of any other State or nation was enforceable or enforced within their borders. They formed their own legislatures, elected their own legislators, had their own executive departments, maintained their own courts, passed their own laws and exercised dominion over all the land they encompassed. They also succeeded to the ownership of any land that had not previously been appropriated, sold or granted by the Crown while recognizing private title to any that had already been appropriated.

When the colonies declared their independence, there was no central government. There was not even a treaty between them through which they could manage affairs common to them all. But England did not recognize the new States’ independence, so the States jointly resorted to arms to enforce the independence they had declared. It was not until five years after independence that the States developed a treaty – the Articles of Confederation – that created a league of the new nations. Each State’s status as independent sovereigns defined its relationship to the world and to one another, and was enshrined in the Articles. That distinct, defined and acknowledged sovereignty governed the establishment of the forms and systems that would eventually result in the establishment of a national government. That distinct sovereignty defines the States even today, and serves as the basis for our federal system. While the term “federal” has taken on a secondary meaning in this Nation, it is intended to describe a federation of equal sovereigns.

As members of a league, each of the thirteen States jealously guarded its attributes and powers of separate sovereignty, and vigorously resisted impingement on its individual prerogatives. As members of a league, they all insisted on equality under the laws and powers of the league, and all States respected that equality. In their conventions and under the rules of the league, each State got one vote. Each had equal power even as all recognized that they were decidedly unequal in population, culture, wealth, economic power and territory.

The States recognized that the vast territory to their west represented opportunity and peril but each recognized that, at some point, that territory would likely be divided into new States. The States agreed that when new States were formed, each new State would be entitled to equal treatment within the league that evolved into a national government under the Constitution. Accordingly, the legislation through which those States were admitted invariably and unmistakably stipulated that they entered the Union of States “on an equal footing in every way” with the original nation-states that first established a league of nation-states: the United States of America.

The nation grew. Vast territories to the west were ceded to the central government by some of the original States. Property was acquired by purchase, annexation, and conquest. States were organized by their settlers and admitted, each on an equal footing with its older sister States. The land acquired by the central government was regularly and promptly transferred, sold, or granted to promote settlement, allow for the establishment of villages, towns and cities, for the development of commerce, and for the spread of civilization across the continent. Indeed, it was the consistent project of the national government to stimulate this westward expansion, and “Manifest Destiny” was national policy. This privatization proceeded promptly and completely so that virtually all the land east of 104°W Meridian is today privately owned and available for the advancement of the social, economic and political interests of the people in the several States in which that land lies.

For over 150 years, the federal government maintained a policy of disposing of public lands so that State governments had complete jurisdiction over nearly all the territory within their borders, giving those States the same opportunity for settlement, development, preservation and conservation of parks and recreation areas, and the promotion of culture and commerce that the original States received.

But it never happened west of 104°W Meridian. The federal government has treated States west of that line unequally. It has allowed those States dominion over only a small percentage of the land within their borders. In some States, like Nevada, it is less than 20 percent.  In Utah, the federal government controls more than 66 percent of the land – a land area larger than the entire State of New York. Of Utah’s 54,335,360 acres, 35,890,000 acres are claimed by the federal government. Ellie I. Leydsman McGinty, Rangeland Resources of Utah, Section 2, Land Ownership of Utah, Utah State University Cooperative Extension Service in cooperation with State of Utah Governor’s Public Lands Policy Coordination Office (2009). Federal bureaucrats control more land in Utah than Utah’s Governor. In contrast, the federal government controls just over one quarter of one percent (0.26%) of the State of New York, which has enjoyed the immense prosperity that comes from private control of land, and has disproportionately more political influence than a State half again its size (27 New York members of Congress compared to Utah’s 4).

Utah cannot build transit and communications systems common in eastern States because its privately owned lands are broken up by intervening federal lands that Utah cannot condemn for such public improvements. Utah cannot control its own destiny. Utah is, in short, treated decidedly unequally by the federal government.

The federal government actively stimulated economic development and population growth in the 38 States to Utah’s east. The federal government, conversely, denies Utah the ability to develop its land and population by forever locking away over 66% of the land within its borders. This disparate and discriminatory treatment is not only inconsistent with fundamental fairness; it is contrary to the Nation’s founding principles. In the words of the Supreme Court: “To this we may add that the constitutional equality of the states is essential to the harmonious operation of the scheme upon which the Republic was organized. When that equality disappears we may remain a free people, but the Union will not be the Union of the Constitution.” Coyle v. Smith, 221 U.S. 559, 580 (1911).

There are solutions. While some argue that there is nothing constitutionally infirm in allowing some States to be treated unequally, history, the law, current trends in Supreme Court jurisprudence and 200 years of constitutional decision making suggest otherwise. We explore those solutions in the pages that follow.

(End of the Introduction excerpt of the Legal Analysis)